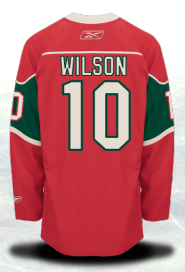 Punishing winger with decent hands and promise in slot anchoring ... he is able to be slotted anywhere in the lineup ... strong, decent straight ahead skater ... energetic, physical play ... brings plenty of size, grit, and physicality ... not afraid to drop the gloves ... does a good job wearing down opposing teams ... has merit down low and in front ... shot certainly has a great deal of speed behind it ... demonstrated some ability to put the puck in the net ... he’s good in the corners on the cycle ... works hard at both ends of the ice

Although he would be a welcomed addition, we need offense and that is the one thing Wilson has a big question mark on

Every year, there is a prospect or two that people dub the next Milan Lucic. The prospect that is all physical but shows little offensive stats, but puts it all together and becomes a top six forward that also brings a game-changing physical game.

Its very hard to find, but every team wants that player. Tom Wilson is this year's candidate.

He is a physical force that can skate fast and has the ability to be a presence in front of the net. He can grind his opponents down, play well along the boards, and even has a heavy shot to compliment his physical game.

But as much as teams want the next Milan Lucic, they could very well just end up with a Colton Gillies (hurts me to say it...), a bottoms six player that plays physical but not much else. There are huge question marks on Wilson's hands and puck skills.

But during the playoffs, Wilson scored 13 points in 13 games, giving a glimpse of hope that he may just have what it takes. But then again, it was only 13 games.

Now will a team want to gamble and spend their first round pick on Wilson? He is a prospect that will be most interesting to watch on draft day.