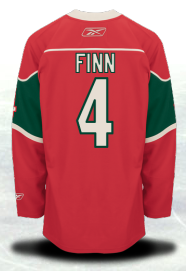 A competitive, gritty six-foot defenceman with some offensive ability ... can play in all situations ... has decent speed ... plays the game with a fair bit of bite ... not afraid to finish checks ... is becoming a very effective offensive defenseman ... a strong point shot ... shown the ability to provide some offence ... makes a solid outlet pass ... does a good job of picking his spots and playing within his means ... does a good job of playing a smart game while minimizing mistakes ... has good hockey sense at both ends of the rink ... ability to make strong, quick decisions ... plays a sound positional game ... rarely gets beat out of position ... a competitor ... he cares and he wants to win ... stellar leadership qualities

His skating is a little choppy ... doesn’t have natural physical tools ... not big enough to be a physical blueliner at the next level ... he gets in a bit of trouble under pressure

A smart player but questions about his ultimate upside. The Wild don't need that...

Reminds me that time the Wild drafted Tyler Cuma, in the sense that Matt Finn is smart and skilled in all aspects of the game, but doesn't excel in anything.

Finn is a smart defenseman that will eat minutes on the 2nd PP or PK at the NHL level, play an unspectacular but safe game. He does have a bit of upside as his development in his offensive game as been quite good this season, so it raises questions whether he has more to come.

Some like Finn's toolset and think he's worthy a top 20 pick but I have my doubts.

He has only average size, average strength, and average skating. He doesn't bring a huge physical aspect to the game nor is he dynamic enough to become a star offfensive defenseman.

At 20-30, Finn is a decent pick because he has a good chance of developing into a safe, all-round defenseman, and will add value to any organization. I just question if he has enough upside to become a regular #3-4 defenseman or will he just be a #5-6 defenseman that will have a long NHL career playing an unspecatular game while eating good minutes.