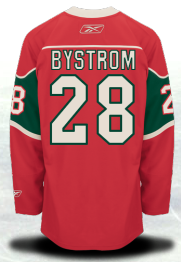 Proven to be a steady defensemen ... a fluid skater ... surprising elusiveness and above-average acceleration ... isn’t shy about initiating contact ... makes a good breakout pass ... excellent, crisp passes ... will aggressively attack off the rush and drive the net in-zone ... excellent hockey smarts ... reads the play exceptionally well ... makes good decisions moving the puck ... excellent instincts at both ends of the ice ... thrives defensively ... intelligent gap-control ... effective positioning ... possesses an active stick ... has shown that he can handle playing against older players

Lacks ‘ideal’ size and strength ... lacks a blistering shot ... his offensive potential isn’t up there

He IS Swedish but is more defensive than he is offensive, so he doesn't exactly fit for a team dying for offense

Sweden has some serious talent coming these recent years, and this year is full of talent. I have Bystrom ranked 5th amongst Swedish draft eligibles and still have him in the first round. That is saying something.

Here's a player that has average height but good mobility, smart and very steady. Consistency is Bystrom's game and he does it very well. He plays a smart and safe game defensively with good positioning and an active stick. He skates quite well and has some decent hands to move the puck out of danger and transition to the offense.

There is no real flaw in his game besides a lack of offensive upside, which is still being explored. He does make a good breakout pass but lacks a shot from the blueline and does not have a dynamic offensive game to carry the offense. He plays very safe and because of that he is very steady and consistent, but some would like to see him take a bit of risk and chance to develop his offensive side.

If you are picking late in the first, Bystrom makes a very good pick because selecting a consistent talented blueliner is never a bad idea. He will have time developing his offensive game and to experiment a bit to see if he can become more than just a steady, defensive defenseman.