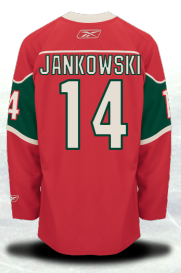 He’s a raw talent who skates well and is a good playmaker ... skating is fast, quick and agile ... a rangy skater with a long, smooth stride ... superb natural athleticism and balance ... size and reach are big assets ... not afraid to get physical ... has a deadly accurate shot ... super soft, quick hands ... one of the best distributors of the puck I've seen ... can also put the puck in the net ... great vision and awareness ... is able to make plays that very few can ... high-end hockey sense ... a two-way player who's good in his own zone ... has an ease to his game yet is very determined and competitive ... very unselfish

Jankowski is the rawest of raw products in this draft ... his inexperience shows up is that he doesn't understand positioning or what it takes to compete hard every shift ... needs to fill out and get stronger ... difficulty involved in projecting players who have performed at the very lowest competition levels

The Wild need a guy with slick hands but do they need a raw prospect like Jankowski?

No one knew who Jankowski was at the beginning of the season, some still don't know.

Jankowski is an extremely raw prospect that plays in an unknown league of low caliber competition, but he still displays an interesting skillset and high potential ceiling. Jankowski is a smooth skating forward that possesses great hands, great on-ice vision and great playmaking abilities. He has a good frame that he is still filling out and will only get better as he gets stronger and more mature.

The biggest problem with Jankowski is the level he is playing at. He is playing in a Canadian prep school, which is probably the lowest possible level of competition out there (I know you can probably find worse, but you get my drift). He dominated his league, as expected, but can he survive USHL, NCAA, and finally the NHL?

With the lack of high potential forwards in this year's draft, some team picking near the end of the first might like to take the gamble. Jankowski has great upside with great tools that would make magic on an NHL team, the question is whether he can adapt to tougher competition appropriately. Seeing as he is just coming out of Canadian prep, he will need tons of time to slowly develop.

I spoke to the PR team at Stanstead, and they would like to point a few facts out about their program-

The conversation I had with them makes me hope (for the Wild's sake) that Jankowski somehow falls to them in the second round, or Fletcher can pull of a trade to add a late first. There is a great story here, both on the kid, and the program. Keep your eye on both Jankowski and Stanstead.