Share All sharing options for: Introducing the Whalers Meter

When the Phoenix Coyotes were struggling for their very lives, there was a large push to move them to Winnipeg. So much so, that the leading sports news source in Canada, TSN, created a gimmick to promote follow the progress of the move. They called it the Jets meter, and it didn't sit well with one particular author here. Eventually, the Coyotes remained in Glendale (still fighting for their very lives), and the Atlanta Thrashers moved to Winnipeg, likely as some sort of punishment for being Winnipeg.

Now, the Edmonton Oilers aren't struggling for their very lives, but they are demanding public financing for their new $50 million arena, something some of the media north of the border highly criticized during the Coyotes saga. We here in the US are no strangers to public financing for private business, especially when it comes to arenas. We also have a strong knowledge of what happens when that financing never comes through.

The Stars wind up in Dallas, and we play chicken with the LA Vikings.

I am not an advocate of moving teams, since fans are hurt in the process, but in this situation, I say Make It 24! We thought we would get ahead of the game, and start tracking where we are at in the return process for the Hartford Whalers. Without further adieu: The Whalers Meter! 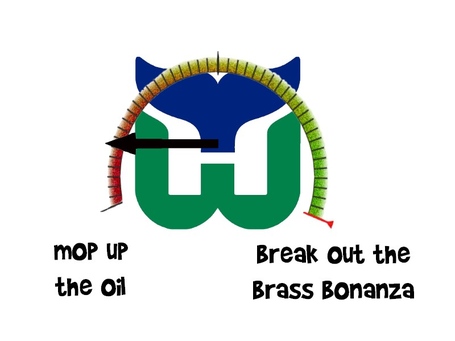 Right now, it looks almost certain the Oilers will get their fancy new arena. It could all change, of course, and the Oilers could be packing up for Hartford. Don't go buy your green & blue Nick Schultz sweaters just yet, but it might be wise to hold off on buying that orange and blue one, too. Actually, just don't ever buy things that are orange and blue. Ever.

We'll keep you posted on the arena in Edmonton, and the sure to soon be formed potential ownership group in Hartford.