Lessons in being a GM: How do Waivers Work?

Share All sharing options for: Lessons in being a GM: How do Waivers Work?

We have had a number of requests to write up the process for how waivers work in the NHL. To be honest, the legaleze that is the NHL's current CBA makes my eyes glaze over faster than a discussion about advanced stats. A month or two ago, I asked the minds behind SB Nation hockey if anyone had written anything about waivers, and it turns out that no one had. However, a fan had.

So, we get a lesson in waivers just in time for the CBA to be renegotiated and change the process. Potentially.

After the jump is a link to the entire post from user "clrkaitken" over at out Toronto sister site Pension Plan Puppets, and the bulk of the confusing part laid out for you. Enjoy, if you are in to this kind of thing, and make sure to leave your thanks to your fellow hockey fan for doing the work to put that post together.

You can find the entire post HERE, if you would like a run down of the types of waivers, and some other useful information. To be honest, it is an impressive piece of work, so you should likely just go give it a read. For those too lazy, here is the part you are all most likely looking for:

Exempt Due to Experience

This is the meat and potatoes of determining waiver eligibility. Three key factors determine whether a player is waiver eligible; age, years of experience, and # of games played..

Depending on the age as determined above, a player is waiver eligible for a certain number of years from the year in which he signed his first contract, as shown below.

For anyone 20 or older, the year in which they play their first professional game is considered the first year counting towards the number of years they are exempt from waivers.

*If an 18 or 19 year old plays in 11 or more NHL games in a season, then the eligible period drops to 4 years for a goalie and 3 years for a skater, with the first year of that period being the year in which the player played 11 or more games.

The other factor is games played. Once a player reaches the threshold (again based on the age at which they signed their first professional contract), they are eligible for waivers. The language of the CBA is very clear that while there are two distinct thresholds, this is an "earliest of" scenario. If a player reaches their games played mark before the reach the years mark (or vice versa), they become eligible for waivers.

Professional Games is typically defined as all NHL regular season and playoff games. However, for players older than 20 years of age, the definition expands to include AHL regular season and playoff games, as well as any other professional game played in Europe while the player is under contract to an NHL team but on loan to a European club. A 25 year old or older basically gets his first year waiver eligible and that's it.

This makes things about as clear as they can get, but also strikes me as the picture explaining how to draw an owl. Step one, player is drafted, step two he clears waivers. Somewhere in between, the great and powerful Oz grants them a brain, a heart, and some courage and poof! they are waivers eligible.

Some one took the time to make a fancy excel spread sheet of it as well, and post it over at wikipedia (never to be trusted, but the chart does mesh with the info above, so feel free to trust this): 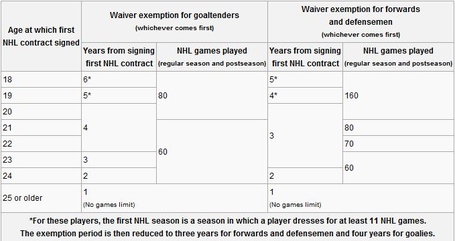 And there you have it. NHL waivers, under the current CBA, explained in words, and in chart form. If you still have questions, please contact the NHL league office in New York.