Tom Lynn: Still Bitter After All These Years

Share All sharing options for: Tom Lynn: Still Bitter After All These Years

Following the growing battle between the moronic "insider" accounts and, well, people with an IQ over 40, has become more and more entertaining everyday. To see anyone come to their defense is generally an exercise in comedy, and allows a great deal of stress to be relieved on a near daily basis. It is difficult to decide which is more ridiculous, the accounts, or the people that believe them.

Today, however, the mess took a whole different turn. While the so called "main stream" media has been criticizing the "insiders," many fans have been watching, and hopefully learning. Turns out fans and media aren't the only ones watching. Allan Walsh, agent extraordinaire, chimed in yesterday calling one King Moron's tweet "dog poop." Good King Moron then called Walsh a 12 year old.

Now, Tom Lynn, agent not-so -extraordinaire and destroyer of the Minnesota Wild organizational depth, has entered the fray, and made himself look a little... silly. Brings a whole new meaning to "Sorry Tom."

Join us for yet another laugh, after the jump. 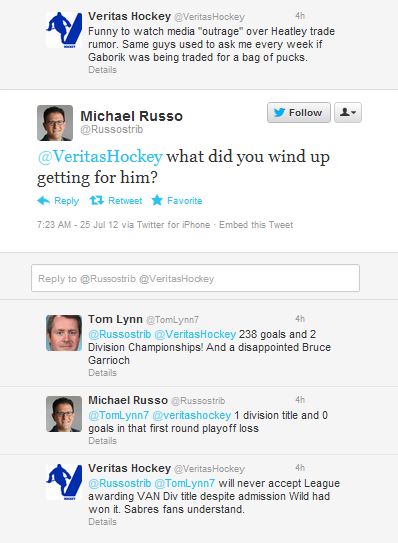 There are so very many things wrong with the line of thinking from Lynn here. Maybe that shouldn't be a surprise, but maybe a guy with scouting experience (however poor he was at it), and acting as an agent, should know when to hold his digital tongue. Maybe not. Heck, let the man speak. It's good for us.

What's wrong with the thinking?

First, he is equating some idiot sitting behind an anonymous Twitter account, making things up and riling up fans to a reporter calling a team official to see if there is any movement on the team's star player in the middle of a contract year? This is simply a ridiculous comparison.

Making up Dany Heatley to the Penguins rumors and putting them on Twitter is no where the same as a reporter checking with a source to see if anything was going on. Do reporters call the source, and if nothing is going on, make something up? For those of you who may not be following along, the answer is no. Reporters get fired for doing that.

Second... Two division titles? Two? As in... more than just the one? When did they win that second title? He suggests the league somehow awarded the Canucks a division title rather than the Wild. The only year it was even close was in 2007, when the Wild lost the division by one point, finishing behind the Canucks 105-104.

It is unclear what Lynn is using as a basis for his claim that the league "awarded" the Canucks the division, but you have to assume he is not happy with a call somewhere in the course of the season that cost the Wild a game. You know, something that happens to every team, every year. Want to win the division? Win more games. If you can't do that, don't complain about it.

The Sabres have a real beef. According to the rules, goals didn't count if the player was in the crease. Any part of the player. The Sabres lost a Stanley Cup because of a bad call. Even if, and that's a big if, the Wild lost a division title because of one call, they still had a chance to win, and did what? Oh, that's right, lost in the first round to the Ducks four games to one.

Maybe if the Wild had drafted and developed any talent to help that 2006-07 team, maybe they could have squeeked out another win and not had to worry about that one point. Maybe opening the playoffs against the Stars would have resulted in a better series. Eventually, the Wild still would have had to play the Ducks, and the Wild had zero chance against that particular team.

Third, they got 238 goals for Marian Gaborik? Where exactly are those goals now? Did they bank those for later use? Oh, that's right. No. They went to the Rangers along with Gaborik. The answer to the question, Mr. Lynn, is nothing. You got absolutely nothing for Gaborik. You drafted him, won nothing with him, and then let him walk for... nothing.

Four blown first rounders in a row and a failure to get anything in return for the only true superstar the franchise has ever had? Maybe now would be a good time to just accept that there is little respect for your opinion. Maybe that's just here in Minnesota. Could be that's it's just me. I doubt it though. The fact that he is now an agent suggests mightily that there was not an NHL team willing to take a risk on him screwing up their farm system, too.

Comparing a reporter doing their job to an idiot on Twitter is bad enough. To claim the Wild were somehow screwed out of a division title is insulting to anyone on that team, and to the fans from that era. Then, to insinuate that they actually got something of value of Gaborik... that's just down right stupid.

It's been years since we had to deal with the inane ramblings of Tom Lynn. Let's hope that after this, it is at least that long again.