Share All sharing options for: Fans Respond to Minnesota Wild and NHL Statements

Well, that didn't take long. The Minnesota Wild released a statement a little over an hour ago, the NHL shortly before that. I was curious to see what the response would be from the fans. Would a sullen, "Yeah, we get it, can we just get it done now?" or a vitriol soaked bloodbath?

That answer is coming fast and furious via social channels. If you are on Twitter, check out the #MNWild feed. The anger is palpable, and does not look to be slowing down. The reaction on Facebook as been somewhat more measured, which could come from the face that they are personally identifiable on Facebook more than on Twitter.

For a look at some of the responses, make the jump.

And those are the tame responses. 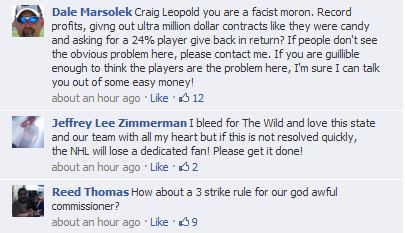 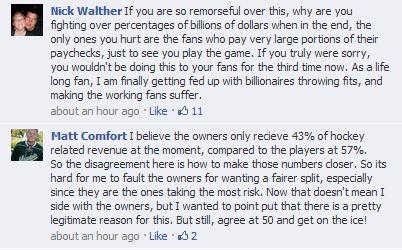 I get it. Fans are angry right now. I'm none too please with the situation myself. However, the Wild are in a no win situation with this statement. They release it, and the fans attack because they feel they are being patronized. Which, maybe they are. If the Wild do not release this statement, then the fans attack because they think the Wild don't even care enough to release a statement.

You had to know the statement would be something similar to what they released. The team is not allowed to comment directly on the lockout, or face fines from the NHL. Craig Leipold is on the negotiating committee for the league, which adds yet another twist. And it's not like they were going to release anything that said, "Well, we're locking out the players, suck it, fans!"

This is a fairly standard press release. I get the anger, but I ask what you would like them to have said. You know, other than "We have a deal in place, let's play hockey."

Update: After reading JJ's comment below, I thought I would make it clear that I am talking about the Wild's statement, not the NHL's. The NHL's statement is over the top patronizing, and as JJ mentions, goes after the rhetoric that they themselves have used as a weapon. They also had to release a statement, but something a little more conciliatory to their role in this mess would have been nice to see.