The lockout means players need to find other gigs. Players are not simply going to sit around and play beer league if they can make the money they deserve and play at a level they are used to, or as close to it as they can get. It was only a matter of time before we started seeing some of the Wild's players signing deals in Europe. That happened today, according to a report: 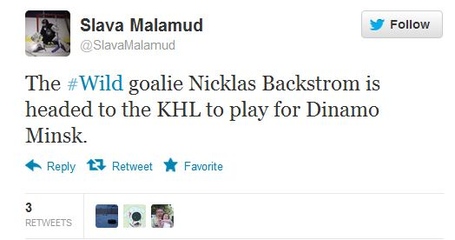 For those wanting to doubt the report, Malamud's profile reads:

Foreign Correspondent for Sport-Express, Russia's sports daily. An NHL.com contributor. A hockey dad of moderate craziness. Non-hockey opinions are my own.

This is likely real, and Wild fans are going to have to get used to the fact that their favorite players are going to go play in a league that makes more headlines for negative situations regarding safety than for the play of the game. Should be interesting to see where players like Zach Parise and Ryan Suter wind up, too.