In Defense of "Celly"

Celebrations after goals are nothing new, but is it time to kill the term "celly?"

Share All sharing options for: In Defense of "Celly"

On Thursday night, young Mr. Nail Yakupov bridged a gap and divided a world all with one slide on the ice. You see, Yakupov scored a goal to tie the game between the Edmonton Oilers and the Los Angeles Kings with just 4.7 seconds to play. The drama had been amped up moments before, when the refs waived off a tying goal from the Oilers due to goalie interference. The fans in Edmonton rained garbage on the ice, and the jokes began.

Then Yakupov scored, and this played out:

I cannot stand the Oilers, and truly wish the franchise would never score another goal ever again, but that? That was awesome. Pure emotion coming from a kid in just his third NHL game, tying the game after his team was slighted, and bringing joy back into the building. (Likely saving the refs' lives, to be honest.)

The debate rages about whether or not the celly was warranted or not (it was).

Wait. Celly? Who the hell uses the word "celly?"

Yes, the peripheral debate around this event is the use of the term "celly," short for celebration. Many of my esteemed colleagues, including Hockey Joe Yerdon from Pro Hockey Talk, Jen Conway of NHL history fame, and our very own Nathan Eide do not approve of the usage.

I'm perfectly fine with the usage, noting that the players use the term freely in conversations amongst each other, and with media. It's like saying "Ovi with 3 grapes and an apple tonight." Sure, just because the players use it doesn't mean writers and fans should, but what it the harm in doing so?

Fans get excited, too. The emotional buy in of a fan is evident every night of the season, and using a little hockey slang isn't going to hurt anyone. If we can't use "celly," are we also prohibited from using "crash the net," "one timer," or, "man, Zach Bogosian is a dirty player?"

I think the term "celly" offers more than the term "celebration." Celebration brings to mind images of a birthday party for grandma, or the wedding dance for a cousin you only met once.

This is a celebration: 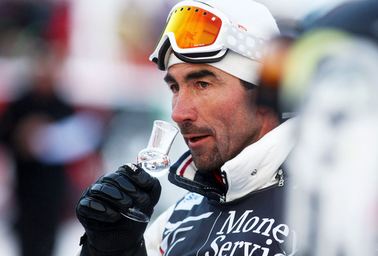 This is a celly:

By the way, do yourself a favor, and listen to our own Bruce Ciskie's call of this goal. Way better celly than the ESPN guys.

You see the difference? The pure joy expressed in a celly can't be properly described in using "celebration." It just doesn't fit. There are some hockey terms that are irritating. Ask Nathan for them while he screams at you for being on his lawn. Then ask him about the greasy tendy flow on that beauty of a kid wheeling like like he's on a gongshow bender. Or, enjoy some favorite cellys from our staff, and from some others.

Bonus points if you aren't a member of the HW staff and can name that goalie.

Here are my two favorites:

Others to be noted

Hejduk goes for a Swim

Thank you to Jen Conway for those last two.

One final celly, from the world of soccer:

So, Wilderness, where do sit on the "celly" debate? Ban the word, or embrace it? What are your all time favorite cellys?