Is The Minnesota Wild's Low ES Sh% A Result Of Inaccurate Shooting?

The Wild seem to be missing the net with a large amount of their shots. Is this why their ES Sh% is so bad? How do they compare to the rest of the league in that regard? I have set-out to answer these very questions and more.

Share All sharing options for: Is The Minnesota Wild's Low ES Sh% A Result Of Inaccurate Shooting?

As you surely know by now, the Wild have been dominating so far this year in terms of puck possession numbers but are not getting the results they probably deserve due to an incredibly low Even-Strength Shooting Percentage. History tells us that Shooting percentage regresses to the mean over the course of a season, so I'm not particularly worried about that, but the lack of goals has made a lot of Wild fans very aggravated and tetchy. I've already discussed the Shot Quality question which has come-up several times, but an interesting thing that a lot of people have mentioned is the fact that the Wild appear to be missing an astronomical amount of shots, which could be why their shooting percentage is so low, as opposed to it being because they keep running into good goaltending and/or bad luck.

I decided to look into this and see if the numbers reveal anything about the Wild' shooting accuracy. I couldn't find any good database that breaks down shot attempts into goals, shots on goal and missed shots at a team level, so I took each team's Fenwick For (goals + shots on goal + missed shots) total and subtracted the goals and shots on goal to leave me with the total "missed shots".


-I have compiled the data into 3 tables; one for goals, one for shots saved and one for missed shots:

Unsurprisingly, the Wild rank near the bottom in goals per Fenwick event. They finished 29th overall, scoring on 2.920% of their Fenwick attempts, with only the New York Rangers posting a worse percentage.


Shots That Were Saved

The Wild are middle-of-the-pack in terms of percentage of Fenwick for attempts saved, with 67.153%, 16th overall.


Shots That Missed The Net

The above table shows that the Wild had the 8th highest percentage of missed shots, with off-target attempts accounting for 30.230% of their total Fenwick events for.


-Here are those numbers illustrated in a pie chart, along with a separate chart showing the league average percentages: 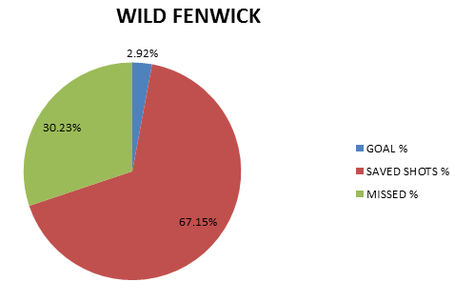 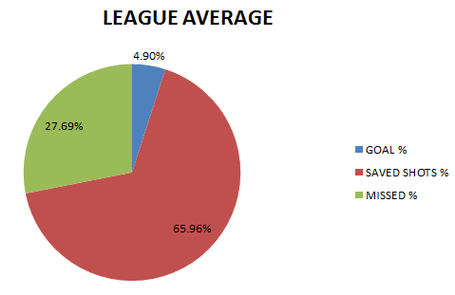 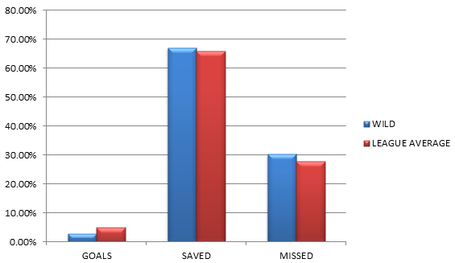 As you can see from the graphs above, the Wild aren't too far from the mean in all statistics. They're just below the average goals scored, and slightly above the average shots saved and shots missed.


-To get a better idea of the effect of missing a lot of shots, here are the top 10 teams in % of Missed Shots, plus the Wild, with their position in the league standings, FenClose% and Sh% . This should give an idea of how missing shots relates to success:

So, in conclusion, missing the net a lot doesn't necessarily correlate with not being able to score goals. The Sharks and others seem to be able to miss a lot of shots and still find the net on a regular basis. As I have said before, the Wild's inability to score is because of the amount of shots they take that are being saved, not the ones that are missing the net. This brings us full circle to the shot quality debate. If you think that the lack of goals is because they aren't getting the right kind of shots from the high percentage areas, then feel free to study the Wild's shooting this year compared the the rest of the league in terms of shot type and location and present your results, because, to my eye, they don't seem to be doing a whole lot different.

In every game this year there have been many chances that could have ended up as goals but instead were saved. There's only so much players can do. Sure you can always get a clearer shot at goal, but defenders in this league tend to make it as difficult as possible and the route to consistent goalscoring has been shown to be to direct as many shots at the net as possible. If the Wild continue to do this, the goals will come. I know everyone is impatient and sick of hearing about how things will be good later on, but you've gotta keep calm and let the team get deeper into the season.