Missed Opportunities Does Wild In

The Wild went 1-5 on the power play in a game in which they dominated for most of the game and out shot the Kings. Unable to capitalize on two third period power plays, the Kings rally to win in a shootout.

Share All sharing options for: Missed Opportunities Does Wild In

Good morning Wilderness! Well hockey was finally back in Minnesota last night as the Wild lost in a shootout to the LA Kings. Most fans can't help but feel like the Wild let that one slip out of their hands. At one point with 5:54 left in the second period, the Wild had doubled up on the Kings in shot total and held a 9-1 shot advantage for the period. The Wild did get a wonderfully awesome goal on the power play from Jonas Brodin that even the Kings twitter account gave kudos to. However, the story of the night was the inability to close out the game in the third.

The Wild dominated from the middle part first period to the end of the second. Wild fans even cheered the team to the locker room without having to be coaxed into it by the Wild Hockey Ops. The atmosphere was festive and everything was going right. Until the power play opportunities started to rise with no payoff. The Wild finished 1 for 5 on the power play with the units struggling to gain the offensive zone in the third period.

It may be a factor of conditioning, but the game seemed to slow down by the beginning of the third. The Kings came out of the locker room and really stepped up the level of physicality and it wore down the Wild. If you haven't heard yet, the Wild have appointed Andrew Brunette as the power play aficionado this offseason. The power play, when starting with a faceoff in the offensive zone seemed to move the puck around in an umbrella-like formation pretty well. Zone entries, however, were a little more discombobulated.

Both power play units seemed to have the same formation and strategy; the center on the half wall, and winger heading to the end red line, the off wing in the center of the box, a defensemen at the center point and the other defensemen hovering around the top of the opposite side face-off circle. Upon winning the faceoff the pass would go from the side wall to the winger inside the box, who then would tip-pass out to the defensemen on the point to start the puck movement. Your point man is your power play quarterback. 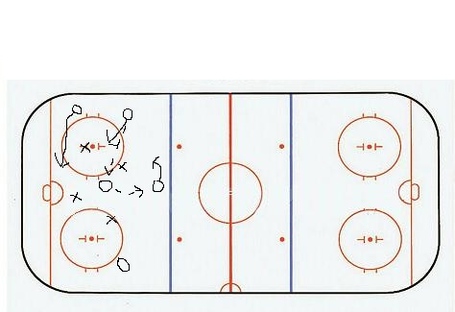 The Wild clearly are using a system and a pattern that even I could decipher, so expect scouts for other teams to pick up on that. In last night's game, it worked every time in that it got the Wild power play possession and led to quick offense. The Wild will absolutely need to get better zone entries to keep the pressure on opposing teams. As much talk as there was about being a "puck possession" team by the coaching staff, we saw a lot of dump and chase while on the power play.

The team looked tense and frustrated by Kings goalie Jonathan Quick as the game wore on and the legs got heavy. Head coach Mike Yeo even alluded to it in post-game presser, "That's what a goalie like Quick can do to you...all of a sudden you start looking for the perfect play." The team is very young, and as Yeo put it, "You got to stay on top of that. You have to remember how we scored. You can't let them take you away from your game. If he's [the goalie] playing a good game, that's fine. It doesn't mean he's going to stop the next one.""

It was only game one of 82 on the season so one should not overreact. The Wild did look like a very good and confident team for much of the game. There are many positives to take from this one. There are also some trends that I know the Wild coaching staff, including Andrew Brunette wants to put a kibosh on this early in the season. "Overall, it's really hard to be disappointed with the game," Yeo said, "from a performance standpoint, you know, if we play like that night in, night out, we're going to win a lot of games."