In today's Noon Number, I return to the scene of the Wild's most frustrating loss of the season.

Back on the 15th of October, the Wild traveled to Toronto, played one of their most dominant games of the year (posting a FenClose% of 73.7%).....and lost 4-1. Up against a Leafs team painted as aggressively old fashioned, the Wild did everything they could to score goals but no bounces went their way. This Leafs team somehow managed to make the playoffs and take Boston to Game 7 in the first round last season, off the back of incredible good luck and some amazing performances from James Reimer in net. They started off this year by once again having a sky-high PDO, scoring goals and saving shots at unsustainable rates while being completely out-shot night after night. They also benefited from unusually efficient special teams.

The Wild began the season by consistently outplaying teams but not being able to win in regulation due to an ES Sh% that hovered between 2% and 4%. PDO has begun to kick-in and the Wild are "progressing" to the mean, and moving up the standings, while the Leafs are beginning to lose some games. The Leafs are still one of the highest PDO teams, while being one of the worst puck possession team in the league, so they are a likely candidate to slip further and further down the standings as the year goes on.

The reason I'm highlighting this game today is because these two teams meet at the Xcel Energy Center this evening for a rematch. 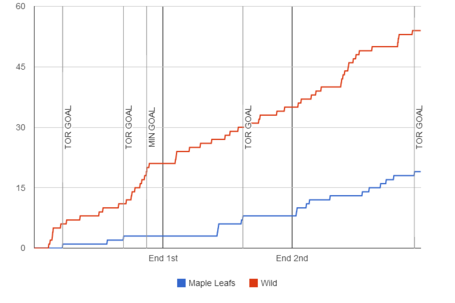 Pretty clear from that chart which team dominated. If the Leafs brass think doing this night after night is a recipe for sustained success, they might be in for a rude awakening come January.

That's complete and utter domination by the Wild. It was like they were playing an AHL team with elite goaltending. The puck just would not go into the net. The Wild finished with 0 goals at 5v5 on 51 shot attempts. The Leafs scored 1 from 22 attempts. In terms of shots on goal, the Wild had 23 vs the Leafs' 9. Darcy Kueper really struggled and let in a couple of soft ones.

Part of the reason for the Leafs early season success while being dominated was their great special teams. The Leafs scored 2 goals on 6 shot attempts at 5v4. The Wild scored once from 12 attempts. Again, Reimer was stellar, Kuemper wasn't. Game over.

In the aftermath of that game, Wild fans went into complete meltdown. The basic tone of their complaints was:

Credit to some fans who kept a cool head at the time, and are being vindicated by the team's recent rise up the standings (you know who you are). Hopefully, no matter what happens tonight, people can stay calm and see the bigger picture. This team is doing some really good things and, at the end of the season ,when the cream rises to the top, the Wild should be in the mix.