Josh Harding has been an amazing story this year; overcoming a career-threatening MS diagnosis which ruined his 2013 campaign, to post the best goaltending numbers in the NHL through the first 20-odd games of the 2013-2014 season. His 5v5 save percentage has been hovering between 96% and 97%, which is, as much as I hate to say it, completely unsustainable. Any Wild fan with a brain knows this, so the major question is: will the regression be slow and steady, or will Harding come rapidly crashing back to Earth? Last night's game in Montreal knocked his percentage down a bit and made it look a little bit more normal.

I'm not saying I don't think Harding is capable of finishing the year as one of the best, if not the best, goalie in the league, stats-wise, but his numbers are almost certainly going to drop-off, which makes me wonder how much they will regress, and how quickly.

That's one hell of an improvement. 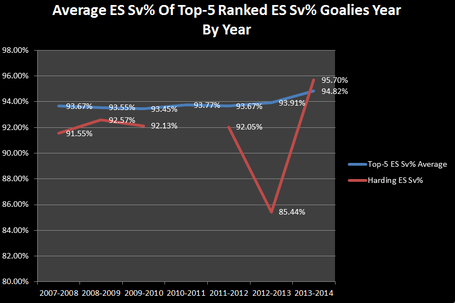 Harding is currently saving roughly 2% more 5v5 shots than even the best goalies over the last few years. When that percentage regresses to the mean, where does it stop? Will he finish the year close to his average, which I think is around 92.5% (once you remove the outlier of 2013), or maybe he can keep his Sv% in the 93-94% range and still be up there with the best goalies come the end of the season. It's impossible to predict at this point. The only thing I can say is that he won't be finishing the season with a 5v5 Sv% of 95.70% (as much as I would love that).

The last few years have been pretty rough for Harding. He missed all of 2010-11 with injury, he missed some time in 2012 and then almost all of 2013. That makes me think that his ceiling could be higher than we think, he just hasn't had a long enough run as the starter without getting injured to really show what he can do.

Whatever happens, I just hope he stays healthy and keeps helping the team. I can't imagine a better story than Harding finishing the year in the running for some goalie hardware, which is definitely a possibility. We just need to be prepared for some games and stretches of games where things don't go so smoothly (much like last night in Montreal).