The Wild try to rebound against the Senators tonight. 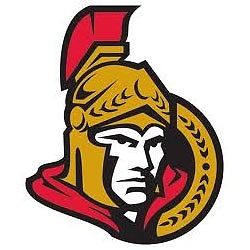 So, remember what I said about the lineup probably not changing drastically?

Torrey Mitchell's lower-body injury has necessitated a lineup move. Jason Zucker has been called up for tonight's game, and will play on the second line with Mikael Granlund and Jason Pominville, displacing Nino Niederreiter to the third line, and Justin Fontaine to the fourth.

Jason Zucker will try to get his game back in the NHL tonight, as he's been off so far this season. He hasn't done terribly in his AHL action (4-4-8 in 12 GP), but his shots are down by almost one per game, and he's had some rather questionable hits (to put it charitably) lately. The Wild have wanted to see him progress defensively, so we'll see tonight if he's made any progress in that department.

Also entering the lineup for tonight is Mathew Dumba, at Nate Prosser's expense. Darcy Kuemper was scheduled to start tonight, but Josh Harding will take the net. The Wild do not seem to have any sort of confidence in him.

Anyway, this should be a fun game between two teams that should be pissed off and highly motivated to win.

So let's get on with it.

1. The Wild were not sharp last night in Montreal. Do they show up with more intensity tonight?

2. Josh Harding will be starting in net tonight, in all likelihood. Will he be able to shake off last night easily?

3. Since Jonas Brodin got his face broken he's seemed a bit off. And I'm not just talking about being on the ice for four goals last night. After a night of adjusting to the half-shield, can he find his previously dominant game again?

4. Jason Pominville hasn't scored for, like, two games. Will he put the puck in the net tonight, or is it time to panic?

5. Though the Sens have been struggling, they have some top-notch firepower in offensive-defensemen wünderkind Erik Karlsson, as well as Bobby Ryan, and Jason Spezza. Can the Wild keep them off the scoresheet tonight?

These are the lineups for tonight.