The Minnesota Wild is having fits trying to find the twine behind opposing netminders. "It's just been a frustrating stretch for us. We haven't played great. I don't know. We have to find a way to score. That's the bottom line. We're not scoring. We're not giving ourselves a chance. We're not scoring goals," Wild winger Zach Parise said after the tough 4-1 loss to the Rangers on Sunday night. "We're not scoring..." is right. The Wild are 29th out of 30 teams in goal scoring this season. After Monday's loss to the Flyers, their freefall from the good November has placed them in a tie with the Phoenix Coyotes for 8th place (Wild are in 9th because PHX has the tie-breaker) with 45 points.

The most recent and forgettable road trip shone light on many of the things plaguing this team. From turnovers, to blocked shots, to misplaying passes, to good goaltender play, posts, and a lack of shots, all of these things reared their head in the past two weeks. From a team that made it next to impossible for opponents to get 20 shots on goal in a single game, now a team that is almost giving up 20 shots in one and a half periods.

SportingCharts.com recently added a new feature. They've created a heat chart for goals and shots visualizing the areas of the ice in which individual players and whole teams take the most shots and score the most goals. With the Wild seemingly supine offense, I got curious and looked at some of the higher goal scoring teams and found one gigantic similarity. 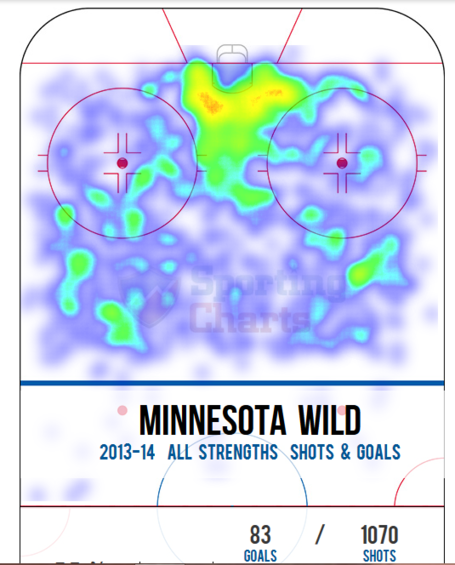 If you notice for the Wild, the majority of the goals and shots are from the area immediately around the goal crease. Also notice that shots and goals from the defensemen at the points are almost non-existent. Either point shots are getting blocked, or defensemen are just plain not shooting.

Here's a look at the Shot/Goal chart of Pittsburgh - a team the Wild just saw within the last week and are trying to emulate. 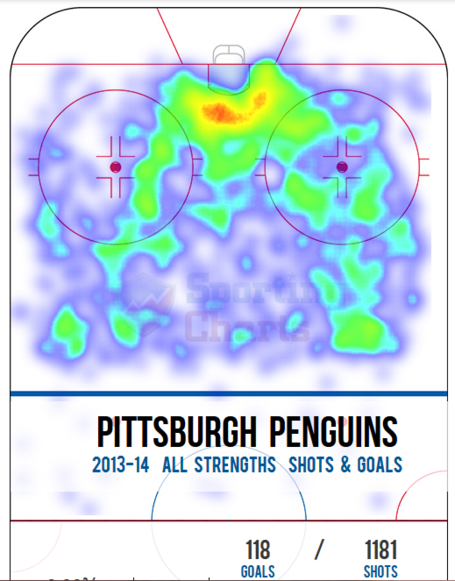 Notice the giant red swath at the top of the crease. Either these goals are being deflected or getting scooped up by guys crashing the net. The red shaded area catches people's eye first, but notice the areas inside the face-off circles. Pittsburgh forwards are getting shots off in a much higher percentage area. Also the point men are getting in on the action as well.

If you look below at the chart for San Jose, a team that started the season on an absolute scoring tear, most of their goals are from crashing the net. What I also noticed was how colorful the slot is. The Sharks have really good size and are always battling for space in the high-traffic areas, such as the slot, and are getting rewarded for it. Just look. The top of the crease and the face-off circles are lit up like a Christmas Tree - all high percentage scoring areas. 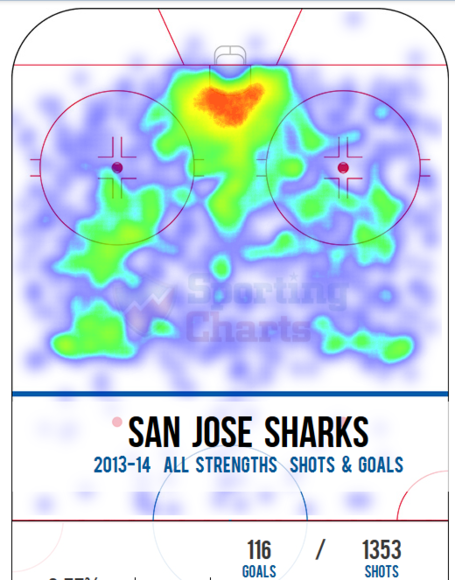 Now let's look at the highest scoring team in the league, the hated Chicago Blackhawks. Their team scoring depth among all four forward lines is something coveted by every other team. They have very active defensemen, and it shows on the chart. 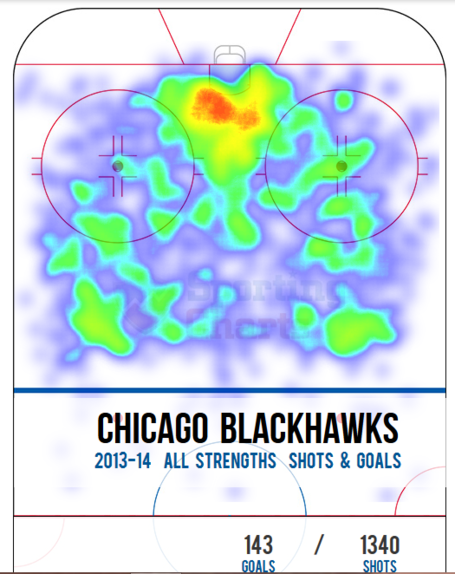 The Blackhawks basically shoot from anywhere and it goes in. The high slot, much like the Sharks, the face-off circles, like the Penguins, and the way Chicago activates their defensemen, is the recipe for big goal numbers and more importantly, winning.

So far we've only looked at teams that are conference leaders. Let's take a look at Phoenix, a team that the Wild are currently tied with. 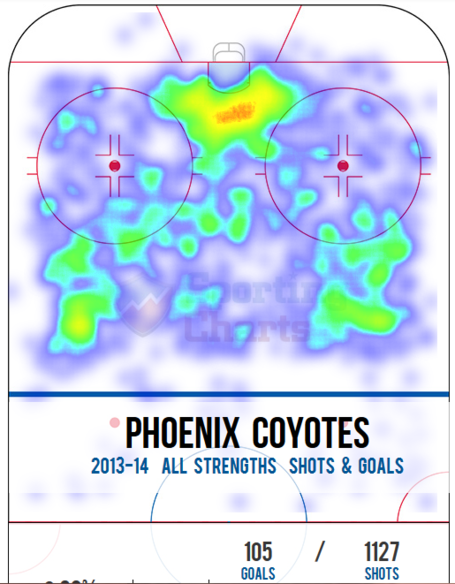 The Coyotes have scored 111 goals so far this season. That's a whole 23 more goals than the Wild!!! They clearly use their defensemen to start their offense. With Swedish star defensemen Oliver Eckman-Larsson coming into his own offensively (Hopefully Jonas Brodin can mimic OEL's offensive output) and no super-star forward like a Patrick Kane, it is reasonable to understand that the defensemen quarterback the offense every time in the offensive zone while the forwards screen an deflect.

The Wild are only getting a sniff of the playoff race because of their great October and November. They even had a three game streak in which they score four or more goals (Nov 1st, 3rd, 5th), which seems like ages ago from the team they are now. Minnesota is ranked 8th in the league for goals against per game with 2.4 and should be attributed with the outstanding play they have received from Josh Harding. Unfortunately, the Wild rank 29th in the league for goals for with 2.1 GF/game.

Fans across the Wilderness have suggested a multitude of possible solutions to fixing the problem. Some suggestions are mixing up the lines and others are requiring of major roster or personnel moves including trades and firings. It's tough to say what the problem is with the Wild and its scoring woes, but Matt Cooke had this to say about it: "It's mental. It's 100 percent mental." If it is purely mental and not something more, then the hope is that the three-day break is just what the doctor ordered. And after looking over those charts, the Wild absolutely need to find more creative ways to pot goals. Mike Yeo said, "Flat out, we need to be better. That's every one of us. It starts with me. We have to be better."