The Minnesota Wild welcome a team that got its start right here in Minnesota at the New Hope Ice Arena back to the State Of Hockey tonight. I remember when Getzlaf was just a wee lad... Welp, the boys grew up, moved out and changed their name to spite their parents. The Anaheim Mighty Ducks take on your Minnesota Wild tonight at the Xcel Energy Center.

G'day Wilderness, and what a fine day it is turning out to be! It is game day, and the not so mighty Ducks of Anaheim come to town tonight to help the Wild kickoff the 2nd half of their season. I really want to get into a little bit of a preview to kick off your day Wilderness. I mean its late, I should be sleeping, but that was my plan here tonight.

Crumple up that, and throw it straight in the trash can, I was thrown completely off my game by something I noticed on the NHL Network. I know what your thinking, "Aaron, are you going to tell us you watched 2 hours of NHL Network and they didn't mention the Western Conference once?" I could only dream of that not at all rare occasion, in fact, it probably would have been better had they just gone with the status quo and forgot their was hockey outside of the Eastern seaboard.

They popped a graphic up that caught my eye, the Western Conference standings. The first thing I noticed was the fact that they had Vancouver in the 3rd overall position despite us holding the tie breaker. Soon to my horror, my worst nightmares were realized ... 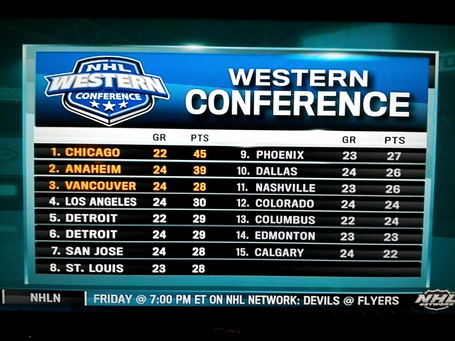 Your Minnesota Wild no longer exist, and have in fact been replaced with a 2nd Detroit team.

C'mon! I know we are fly-over country and nobody gives 1 shit let alone 2 about what goes on up here, especially in the 8 months of the year known as winter, but this is just stupid. Oh, and, not only if we were now a 2nd Detroit team, we would somehow have a 1 point lead over Vancouver .... 1 of those damn Detroit's need to be moved to 3rd, and you can just throw Vancouver in the Pacific.

Minnesota Wild: Win over Vancouver Canucks Indicates Team Can Win the Division | Bleacher Report - I promise you this one is NOT one of those click the next 387 slides to read the story kind of deals.

Ducks-Wild Preview - Yahoo! Sports - Everything you'd expect in a preview, plus whipped cream on top.

Wild-Anaheim game preview | StarTribune.com - Quick look ahead at what to look at quickly tonight.

Dany Heatley to Devils a possibility? - Make a case for or against Heater to the Devils Wilderness.

First Round Bust: Firing Up The "Brodin For Calder" Campaign - Make a case for or against Brodin.

Minnesota Wild: Young Charlie Coyle coming on strong - TwinCities.com - Shall forever be known for, "The Shift"

Backhand Shelf’s best GIFs of the first half | Backhand Shelf | Blogs | theScore.com - This may destroy your bandwidth loading so many gifs all at once. But it is well worth it just for Schultz, the "Moveable Object"

A goaltender’s immediate impact on a team’s defensive results | Backhand Shelf | Blogs | theScore.com - Pack a lunch for this monster. *WARNING! ADVANCED STATS AHEAD!*

The story of Coyotes enforcer and Twitter star Paul Bissonnette in 140 characters at a time | StarTribune.com
Holy crap, this one is like riding in stop and go traffic on 169...

Trading Jarome Iginla: It’s a rather delicate situation for Calgary Flames | Puck Daddy - For those of you that don't know, his full, legal name is Jarome Arthur-Leigh Adekunle Tig Junior Elvis Iginla.

Hottest team in the NHL? The Columbus Blue Jackets, of course | Puck Daddy - And to think, we had Todd Richards in our hands, and let him go ...

You have double duty here Wilderness, so cruise on over to Battle of California and say hello, stay for a coffee and move right down the road to Anaheim Calling and get your share of opinions from people who are probably a lot warmer than you.

Charlie Coyle's monster shift - YouTube - Because you know you want to watch it over and over again.

Kaspars Daugavins attempts legendary shootout move, fails against Tuukka Rask (VIDEO) | Puck Daddy - I'm a fan of this, even though it failed. I don't know why, just puts a smile on my face.