The Swarm look to beat the Stealth and cancer in one night.

The Minnesota Swarm host the Washington Stealth in the Swarm's annual Hive Cares Night, a fundraiser benefiting the Randy Shaver Cancer Research and Community Fund. Hive cares night is always a fan favorite, as the Swarm will wear special jerseys that are being auctioned off on MNSwarm.com. This year's version are bright green in honor of St. Patrick's day, and you can also bid on the matching shorts, as well as a one of kind helmet that will be worn by goaltender Tyler Carlson.

No word on why they are not purple & green for St. Urho's day.

Here is an example of the greatness of the unis for tonight: 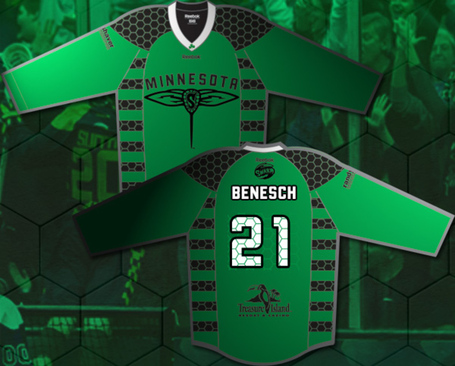 In addition to the uniform auction, there are t-shirts for sale, bracelets, corporate donations, and ticket price donations to RSCRCF. Finally, there is the Coach's Challenge, in which individuals or companies pledge to donate $10 per Swarm goal, matching Swarm coach Joe Sullivan's pledge. Hockey Wilderness has answered this challenge.

As for the game, the Swarm will be looking to get back in the win column as they ride a three game skid into the X tonight, including a loss to the Stealth in Washington two weeks ago. The Swarm have not been blown out by any means, but the team has struggled to find itself since losing captain Andrew Suitor to season ending knee surgery.

The offense, once the Swarm's bread and butter, left the team without a goal in the entire first half against the Edmonton Rush the last time the Swarm played at home. You can bet that players such as Ryan Benesch, Kiel Matisz, and Callum Crawford will be looking to give their fans something to cheer about tonight, and those who answered the Coach's Challenge something to pay for.

The Stealth bring a recognizable threat in Rhys Duch, Athan Iannucci, Lewis Ratcliff, and Cliff Smith. Shutting down such a versatile threat is not an easy task, and is likely more of a containment issue for the Swarm D. Focusing in on Duch will be the key tonight. Stop him, and the Swarm have a solid shot at victory. Of course, that is really easy to say from the comfort of a the press box.

The Swarm need this one, as they are in danger of becoming the one team in the league that does not make the playoffs. Currently tied with the Colorado Mammoth for the worst record in the league, the Swarm are running out of time to find their identity and get on a winning streak headed into the playoffs. Must win situations are a tough place to be, but for the Swarm, the Playoffs have to start now.

Game time is 7PM. If you're coming out, be sure to give yourself plenty of time, as St. Paul is sure to be a disaster zone of drunken revelry. Drive safely and do your best to avoid the amateurs. If you are watching from home, check out MNSwarm.com for the game feed.