With the first overall pick, the Minnesota Wild is pleased and proud to select...

Ha! We can dream.

Most likely going to be the first overall pick, Seth Jones was fourth in WHL defenseman scoring with 56 points in 61 games. He was Portland's #1 defenseman and was just rock solid defensively. He also starred on Team USA during the World Junior Championships scoring 7 points in 7 games, winning the gold medal.

There really isn't Jones doesn't have. He has size and strength, he is a rock defensively, make strong breakout passes, can play both physical or finesse game; he can do it all.

If I had to nitpick, I would say that he doesn't display elite offensive creativity that a Erik Karlsson might show, but like Ryan Suter, he will put up the points without the flash while playing a ridiculous amount of minutes and being unbeatable defensively.

But if you hold the first overall pick and want a sure-fire player that will be key to your team's future success, Seth Jones makes an excellent choice. Expect to see him gone first on draft day.

For his size, Jones is an excellent skater. Has a long, smooth and powerful stride. He is very mobile and has great reflexes and shows off great agility when needing to go side-to-side or needing to quickly transition from skating forwards to back. He makes strong outlet passes and works the power play point like a seasoned pro would. Jones also has a killer shot. It's extremely hard and he has the ability to get it on net, despite traffic. He's an imposing player due to his natural size and definitely isn't afraid to hit or use his body but lacks that ‘killer’ aggressive physical nature. Jones is very quick in his decision-making and rarely makes a mistake in any situation. His defensive awareness and own zone play is strong as he handles attackers consistently well by either standing them up, pushing them to the outside or buy calmly poking the puck away. 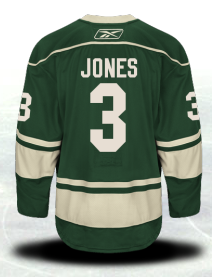