It is hard to ignore a young player who is succeeding in a men's league. Sound familiar? Well, Mikael Granlund did something similar. But his struggles at the NHL is due to the lack of size, something Barkov has plenty of.

He is 9th in scoring in the top league in Finland and he is only 17 years old. A very impressive feat.

He has size, strength and skill that he uses smartly and effectively. He can take over the middle of the ice and is a hard opponent to play against. He isn't flashy but he gets the job done. Sounds very similar to our Mikko Koivu in the sense that he isn't dynamic but still is a player you build around.

Some might question Barkov at #3 with exciting prospects like Jonathan Drouin still available but Barkov has proven his worth in the top men's league in Finland and against the best of junior hockey in the World Juniors and impresses every single time. Some might question his offensive upside but he is probably the safest best for a first line centerman in this years draft.

The question is, just how good of a first line centerman will he be?

Barkov is bit of a big lumbering skater who does have decent straight line speed but lacks much in the way of lateral quickness and jump in his first few steps. He does not initiate contact in a menacing way but uses his size effectively and with the purpose of disrupting opponents defensively or protecting the puck. Despite his size, Barkov is somewhat shy using the power he has; he is not a power forward, running over defenders by any means. He is a strong two-way centre with excellent smarts and developing offensive skill. 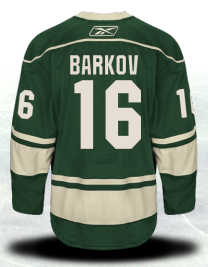 Perfect compliment to Mikael Granlund, we're just not going to get him