Seth Jones, Nathan Mackinnon, Aleksander Barkov. All three are quite good all-round players with some flash but they're main value comes from bringing everything.

You want a prospect who is a bit undersized but brings all the flash you can have? Meet Jonathan Drouin.

Slick hands, super creative, sees the ice with 360 degree vision. He is just an amazing player to watch to play because how much flash he plays with and control he has on that flash. He has amazing control of his skills and can dangle and ankle break the best defenders.

Drouin has probably the best season any draft eligible prospect could have, including Jones, Mackinnon and Barkov. He scored 41 goals and 64 assists in 49 games and has won QMJHL MVP, QMJHL Personality of the Year, QMJHL Playoffs MVP, QMJHL First All-Star Team, QMJHL Cup Champion and QMJHL Best Professional Prospect. He even saw time with the Canadian U20 team.

So why do I have him at #4 and not #1? Although he has amazing skill, size is still a factor that needs to be considered. In any other year, Drouin would be #1 but when his peers consist of a potential franchise defenseman (Jones), a potential 50 goal scorer (Mackinnon) and a prospect that is a first liner in a men's league (Barkov), it just so happens his size is his only fault.

But don't be mistaken, he can erase much of that doubt with dazzling one-on-one plays and elusiveness. He'll be an exciting player to watch.

Drouin is a good, not exceptional, skater. He’s very agile and shifty. He has enough acceleration to break away from opposing defenders. His balance is impressive for a player of his stature. He shows some of the best puck handling skills in the entire 2013 draft class. The puck just seems to be glued on his stick at times. He’s very creative in the offensive zone, almost to a fault. He protects the puck very well, especially for a player of his size. A natural playmaker, his head is always up looking for an open teammate. His vision is very impressive, setting up players even when they don’t expect it. He’s an incredibly accurate passer but also has a very accurate shot and doesn’t mind getting into the dirty areas to score a goal. 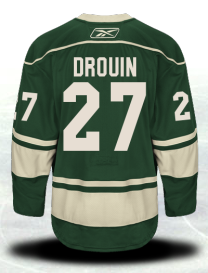 Amazing prospect, exciting and can get you off your seat, just not in the Xcel Energy Center.

Jonathan Drouin Best Shift of the Year (via Halifax Mooseheads)