It must be a strong year if more than one draft eligible prospects are having good years in the men's league in Europe. Next to Aleksander Barkov is the highest rated Swedish player, Elias Lindholm.

He isn't the biggest or grittiest prospect but he brings an extremely strong all-round game with a dash of flash and dynamic play.

Lindholm's main weapon is his hockey sense. He has great anticipation skills which makes him extremely dangerous both offensively and defensively. He can create turnovers by reading the passes then immediately turning them into scoring chances. A Datsyuk-lite maybe?

Primarily a playmaker, he showed he also has decent scoring abilities by posting 11 goals and 19 assists in 48 games in the Swedish Elite League. He has also had strong showings in international tournaments. This season, he won a silver medal during the World Junior Championships and was a nominee for the Rookie of the Year award in Sweden.

The previously ranked prospects are either extremely dynamic or have great strength/size combo to them. Lindholm has neither but uses his head extremely well with strong agility and some nifty hands. He is a prospect that will be good at everything outside of extremely physical assignments.

While he may not be as talked about as Drouin or Barkov, he has the potential to be better NHL players than all of them. A very underrated player and someone that is worth keeping an eye on for the next few years.

While Lindholm does not possess elite speed, he is very agile, being able to twist and turn in and out of traffic. He's got very good balance, which will help him make up for any physical shortcomings when it comes to protecting the puck and battling along the boards. He already protects the puck extremely well, has got great hands, can handle the puck at a high speed and in tough traffic and controls the play even when tightly checked along the boards. Lindholm can play an up-tempo give-and-go style of play down low to make use of his linemates to create opportunities. He sees the ice extremely well, and is extremely smart. He uses that intelligence to read the play exceptionally well. Not the heaviest of shots, he shoots ‘smart’, making the right decisions when to shoot. 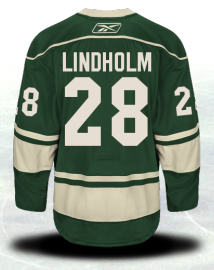