The talented centerman finds himself in the sixth spot of the HW Draft Rankings, not because of lack of skills, but because he has the misfortune of playing on a struggling team.

His team, the Ottawa 67's, is the worst team in the Ontario Hockey League but Monahan still managed to score 31 goals and 47 assists in 58 games.

He did not have a chance to strut his stuff on the big stage in any international tournaments or big playoff games but his skill is undeniable.

He is above average in every single category aside from a high-end hockey mind which allows him to bring together all his tools to produce something dangerous on the ice. He isn't going to dazzle consistently with flashy plays but he has strong offensive and defensive instincts will produce good opportunities all around the ice.

Monahan gives any NHL team a prospect that provides both a safe player and a player with strong upside. He will be highly valued on draft day.

The two-way, well-rounded Monahan is extremely smart and solid on his feet. The versatile centre does not get knocked over very easily and he’s able to stand his ground just about every time he gets involved in a corner battle. He doesn’t have elite explosive speed, but he plays more of an east-west game rather than a north-south game so it doesn’t get in the way of his effectiveness. He’s also very strong on the puck, rarely losing possession or being pushed off. Monahan makes consistently strong, accurate and timely passes to his linemates. He can score using a strong and accurate wrister from the slot, taking the puck from the corner and driving the net or by deflecting a slapper from the point. Uses his size well in all facets of his game but does not leave his positioning to do so. His overall sense of awareness is top notch; NHL level. Monahan is a determined two-way player with strong leadership qualities. 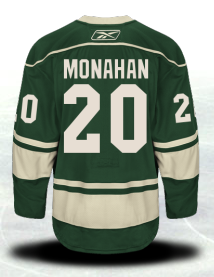