This is the point where the rankings start to get hard to decide. Prospects have either have a bit more risk to them or their upside is slightly lower.

At #7, we have Darnell Nurse, who is a defenseman with huge upside but has a lot of room to fill out.

Nurse started the season with an "eh" type of performance in the Ivan Hlinka but quickly erased doubts by starting off strong in the OHL and never stopping. A 6-4 defenseman that plays with grit, has impressive mobility and who can run the powerplay is a prospect that is highly valued. He brings ability in all zones of the ice.

He finished the year with 12 goals, 29 assists and 116 penalty minutes in 68 games. He also won the OHL Academic Player of the Year award, showing scouts he is not only a factor on the ice but also off it.

But here is my question: at 6-4 and 185lbs, Nurse looks very lanky and skinny. He plays with punch but he will need to work on his frame in order to survive the NHL and this requires careful offseason training, more than some other NHL draft prospects.

But still, a big defenseman that brings everything to the table is a rare player to have. He will just need to make sure he adds those pounds to bring all his tools together.

At this point, Nurse is definitely my top prospect available from the OHL. All season long, I wrestled back and forth between Monahan and Nurse. But it's clearly Nurse now IMO. He possesses so much potential at the next level. He could be a perennial Norris candidate IMO.

The thing I like most about Nurse is how much he improved this season from the last. You need to look at that progression and think about just how good he could be, if he continues to tap into his athletic bloodlines (father was a CFL player), and continues to improve.

He's certainly a potential dynamo at both ends of the ice. His size (6'5, pushing 200lbs), makes him an asset in the defensive end. As does his skating ability. He's incredibly difficult to get around and he's physical enough to intimidate. As he gets stronger, I expect his physical game to become more consistent and more effective. He certainly has the mentality to be a bruiser. In the defensive end, he's still learning a bit. He can get caught out of position at times, but with strong coaching I think this improves.

Offensively, he went through the biggest transformation this season. He looked very poised and confident with the puck and took chances in leading and joining the rush. His skating ability makes him a threat offensively. He's also got an absolute cannon of a shot that will only get better as he gets stronger. His play on the powerplay is improving. This year, with Ryan Sproul and Colin Miller on the point, Nurse was relegated to the 2nd unit. Next year, it'll be his show to run and I expect very big things from him.

When all is said and done, Nurse has the potential to be one of those defenseman who doesn't really have any holes in his game. He's the complete package and I think he's the 2nd defenseman off the board after Seth Jones. 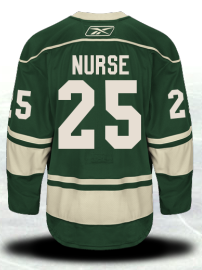