To continue our prospect articles, we continue with our #8 ranked prospect with Nikita Zadorov. Soon after, we'll skip the rest and go straight to our top 100 prospects for this years draft since I know many of you already know the top 10 and just want to know who we have in the rest of the draft class.

This is the point where the rankings start to get hard to decide. Prospects have either have a bit more risk to them or their upside is slightly lower.

At #7, we have Darnell Nurse, who is a defenseman with huge upside but has a lot of room to fill out.

Nurse started the season with an "eh" type of performance in the Ivan Hlinka but quickly erased doubts by starting off strong in the OHL and never stopping. A 6-4 defenseman that plays with grit, has impressive mobility and who can run the powerplay is a prospect that is highly valued. He brings ability in all zones of the ice.

He finished the year with 12 goals, 29 assists and 116 penalty minutes in 68 games. He also won the OHL Academic Player of the Year award, showing scouts he is not only a factor on the ice but also off it.

But here is my question: at 6-4 and 185lbs, Nurse looks very lanky and skinny. He plays with punch but he will need to work on his frame in order to survive the NHL and this requires careful offseason training, more than some other NHL draft prospects.

But still, a big defenseman that brings everything to the table is a rare player to have. He will just need to make sure he adds those pounds to bring all his tools together.

When you're 6'5, 230lbs, you can hit like a truck, and you have no issues with mobility, you're going to get consideration inside the lottery.

That's the case for Zadorov. The size he possesses is obviously awesome, but when you combine it with a slick, effortless, skating stride it becomes even better. He's incredibly difficult to beat off the rush because he can skate with you, but also has that long stick and aggressive nature which makes him hard to get around. That aggressive nature is also very appealing. He's definitely become one of the most physical players in the OHL. His hits hurt and he strikes a lot of fear into opposing forwards. He'll plant you on your butt in the neutral zone, he'll rub you out in the corners, and he'll stick you in the back in front of the net. He's simply a physical beast. I do feel at times that he becomes too physically focused though. He can be prone to taking himself out of position in order to go for a big hit and at times, he'll get caught scrambling in the defensive end after engaging too long in the corners. He needs to learn that he can be effective sometimes by just using his reach and positioning and that occasionally that big hit just doesn't need to happen. In order to become a truly terrific defensive player, he'll also need to tighten up his coverage reads. Sometimes he can get caught standing around watching the play. In terms of his offensive game, I think he can be a fairly effective player at the next level. I don't see a future 40-50 point guy. But, if he continues to work on his breakout, gains confidence in his ability to skate with the puck, and improves the accuracy of his shot, he could be a second powerplay guy and possible 30 point dman. He has enough skill with the puck to make things happen off the rush, but he's not incredibly aggressive and doesn't usually break the opposing blueline. Towards the end of the season and into the playoffs (and Memorial Cup), he was starting to be more aggressive without the puck offensively; taking chances by jumping up in the play or trying to slip in the backdoor.

Bottom line is that Zadorov has the skill set to be a very solid two-way guy at the next level and someone who can log 20 minutes a night for your team. 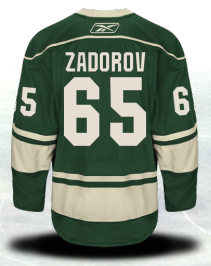