Time is running out

Share All sharing options for: Defending the Blue Line Charity Game: An update

At the beginning of the month, I wrote about the Defending the Blue Line NHL Players Charity Game. Well. I'm back with an updated roster and a reminder on the details.

The game takes place August 3rd at Ridder arena on the U of M campus. Gates open at 1 with autographs for those with autograph tickets from 1:30 to 2:30. The game is from 3-4. At the end of the game, there will be a silent auction for game worn jerseys and other NHL items.

The roster has been expanded to include:

The game is in a team USA vs a Team Canada format. Team USA is captained by Matt Hendricks, and team Canada by Josh Harding.

Tickets are 10$ each and limited tickets are at here. You can also contact me for tickets, and I believe Bryan has a few left. Autograph tickets area also available from the site, and they are 20$. Suites are sold out. You can donate 20$ or more to be entered in a drawing to win a team signed Team USA or Team Canada jersey. If you can't make the game, you can donate tickets to send a military family to the game.

Here is a picture of this year's jerseys: 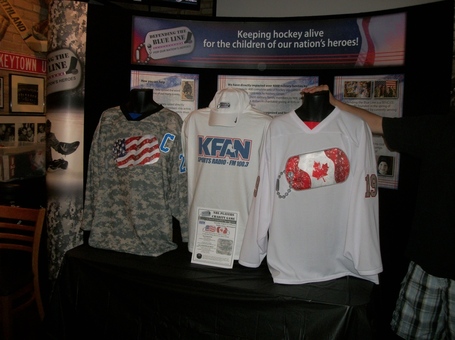 This is going to be a great game. Hope to see you there, Wilderness.