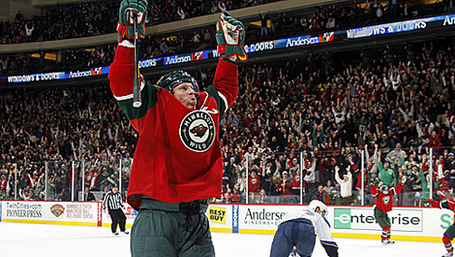 With training camp coming just around the bend, and the season a month away its time to start thinking fantasy hockey! This has been pretty popular in the past, even last season with the lockout.

First thing is first, just because I may organize this thing, it certainly does not mean I'm some sort of dictator with how it is run. Last year WildEast came up huge, crunched a bunch of numbers and put together the scoring system and roster system. I was merely the organizer. I will try to dig up last seasons scoring system and run with that unless we have objections.

Winner will be determined by overall points in the season, or most bribe money sent my direction. The winner will also receive a great prize like air or another fan post they can create bragging of their fantasy hockey dominance.

Last season, we used yahoo, which I will be using again unless we have some massive objections or someone has found something better out there. I'll be looking for 12 teams for the league, if interest exceeds the 12 we will see about starting a 2nd league and dividing the teams evenly and randomly.

Any other idea's or suggestions let me know. You can reach me here in the comments, via email(find it in my profile), twitter, carrier pigeon, smoke signal, or sky writer. We have a month before the season kicks off, plenty of time to get this organized this go around.

So, say it with me Wilderness...

Alright folks, we are getting close to the start of the hockey season and thus we need to get this draft ironed out. I'd like to accommodate each and every one of you but the sheer logistics of that is near impossible. We have different time-zones that come into play, and even folks across the pond.

As of right now, the draft date/time for both leagues is set to Sunday, September 29 at 6:30 pm for us in the central time zone. I'm sure whichever time zone you may be in this is adjusted for you already on the league page. If this works best for everyone, perfect! If this does not work for a majority of you we can tweak it. If a couple of you cannot do this time we can see about adjusting.

So let me know what you think, otherwise it stays where its at.