A delve into the personal life of a someone you haven't met!

I know why you're here. This is a blog about the Minnesota Wild, and you're here, obviously, to read and discuss about your favorite hockey team, and the NHL in general. I try to accommodate that feeling as best I can, and I rarely feel genuine when writing about matters that veer from the subject at hand.

However, in early June, I didn't stick to the subject. My pup, Doug Funnie was hit by a car and died. I couldn't think of anything else to do but to write about him. So I did. And your response was overwhelming, and overwhelmingly kind. It made it a bit easier to get through the ordeal, knowing that there were people to share in my grief, even if they'd never met me.

We took some time to grieve since then. We received, spread, and kept some of Doug's ashes. We worked very hard to assemble all of our pictures into a scrapbook memorializing him. We thought about him every day, even as the silence in our house got less deafening, and the pain started to recede.

Finally, we started looking for, and found, another addition to our family. 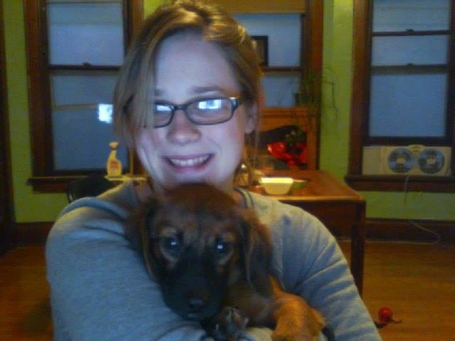 We adopted Topher from a foster home through Ruff Start Rescue, who transported him from a high-kill shelter in Missouri. He's about 6 months old and is a dachshund mixed with ????????. He's goofy, happy, and sweet. A fantastic companion to watch The Wire with, so long as there's not dogs barking on the show. We've only been with him for two days, so we don't know him that well, so there does exist the possibility he could turn out to be a racist, or murderer, or a fan of show tunes. But he has us fooled for now. We're pretty happy for him to be in our lives, and Alicia and I are excited to start out this new chapter with a furry friend.

Thank you for your support, Wilderness. We're OK now.