Boogie with The Noogie: The Summer that was Wild

A brief look back at the off-season for your Minnesota Wild.

Share All sharing options for: Boogie with The Noogie: The Summer that was Wild

The summer has come and gone and now we start to ramp it up for the start of another NHL season for your Minnesota Wild. A lot has happened since the Wild closed their season out in Chicago last May. It's time we take a trip down recent memory lane and review the summer that was 2013.

The off-season started with a move as the Minnesota Wild's farm team, the Houston Aeros were unable to come to terms on a new lease in Houston. Houston was a great home for the AHL team, and unfortunately the worst case scenario for the Aeros faithful played out. The team after concluding their playoff run, packed their bags for the cornfields and cow-pie pastures of Iowa. A name change would follow the team as they would leave the Aeros behind and come to Des Moines as the Iowa Wild.

After the Wild were dropped like a bad habit from the first round of the playoffs, the news cycle followed suit for a brief period of time leading up to the NHL Stanley Cup Finals and the awards announcements that go with them. Of course the Wild's very own Ryan Suter was nominated for the James Norris Memorial Trophy which honors the league's top defenseman. Suter of course was snubbed in favor of somebody with more writers in his area as living and playing in fly-over country strikes again.

Josh Harding also earned a nomination for the Bill Masterton Memorial Trophy which is given to the player who best exemplifies the qualities of perseverance, sportsmanship, and dedication to ice hockey. Harding however, was not overlooked as Suter was and received his honor in mid June as the NHL Playoffs were winding down.

The end of June brought us the 2013 NHL Entry Draft. Although the Wild did not have a first round pick this year after trading theirs away to the Buffalo Sabers in the deal that brought us Jason Pominville, they did get a 2010 5th overall pick by trading fan favorite Cal Clutterbuck to the New York Islanders in return for Nino Niederreiter.

Draft day also brought the Justin Falk era to an end in Minnesota as he was dealt to the New York Rangers for an expiring contract and a 2014 draft pick. When the Wild finally got around to making a selection in the second round of the draft, they selected Gustav Olofsson, a Swedish born defenseman who is all but a natural-born American as his family moved state-side very early in his life.

July brought us the compliance buyout period as well as NHL Free Agency. During the season everyone was certain the Wild would use one of their buyouts on Dany Heatley's over-sized contract. Unfortunately for those prognosticators Heater was not cleared medically by July from an injury he sustained in some extra-curricular activity with Marc-Edouard Vlasic (Claussen pickles are so much better) back in April and thus not eligible for a compliance buyout.

The Wild like many teams this summer where in desperate need of clearing up some cap space and Heatley's injury would ultimately be unfortunate for Bloomington native Tom Gilbert, who now found himself right in GMCF's cross-hairs. Gilbert was given his walking papers, gaining much praise from the some of the fans who had grown exhausted from Gilby's play. As of this writing Gilbert had still not found a new home in the NHL.

Balance was restored when the Wild replaced one of us with another one of us. The Wild signed Baudette native and former Vancouver Canuck Keith Ballard to a two-year deal. I know what your thinking, he's one of us, how could things get any better? Well Wilderness, the Wild were not done yet....

The very next day the Wild reached down into the depths of hockey hell, and pulled the always lovable, cuddly teddy bear-like Matt Cooke from oblivion! For all intensive purposes the depths of hockey hell in this case will be represented by Pittsburgh. The signing was not without its controversy as some look at Cooke's checkered history and cringe. After the initial sting has worn off though I think some folks have come around, but others seemingly never will understand just what Chuck Fletcher was thinking.

The same day we signed Cooke, the Wild also traded away streaky forward Devin Setoguchi to the Winnipeg Jets for a 2014 second round draft pick. This move was made as the Wild needed to clear up some more cap space to be able to re-sign some of the younger up and coming kids.

The Wild also STOLE another defenseman from the Nashville Predators this summer in one Jonathon Blum. Take that Nashville! Jon Landry was also picked up on a two-way deal from the New York Islanders which closed out the new acquisitions for the Wild in this summers free agency.

Never gonna give you up

With Josh Harding's health in question, the Wild signed goalie Niklas Backstrom to an extension. They needed to be sure they had a quality netminder around with prospect Darcy Kuemper not quite being ready for the spotlight.

The Wild also made sure to keep budding defenseman Jared Spurgeon in the fold. The 5'9" blue-liner has turned into a real asset on defense and has earned his place on the Wild roster.

Other noteables the Wild also held on to are the Red Rocket Stephane Veilleux, as well as Steven Kampfer, and Tyler Cuma. Of these 3, Veilleux is the only one who saw any action with the big club last season, 2 games he dressed for in the playoffs.

Of course no summer is complete without a few casualties on the roster. The Wild lost Brett Clark although the opportunity to grab him is still out there as he has yet to find a new home in the NHL. Clark was acquired as a free agent last March and helped add some depth to the Wild's blue line for last seasons playoff push.

In the most expected move of free agency the Wild did not tender long-time forward Pierre-Marc Bouchard an offer and he was allowed to find a new home. He has moved on to hang out with Clutterbuck playing for the New York Islanders. Bouchard had a bright start with the Wild but a nasty bout with concussions eliminated the better part of his last few years with the Wild.

In a move everyone knew was a very real possibility but nobody wanted to see happen, grizzly veteran and one of us, Matt Cullen will hang his skates in Nashville this upcoming season. He will be missed, but seeing as he will be playing within the division we will get to see plenty of him this year.

A new season, a new sweater

As the summer wound down, the Wild released a new road jersey for the world to see. They unveiled the new road whites on September 1st at the Minnesota State Fair. Personally, I like the new sweater. A bit of the old-school splashed on top of what they already had. 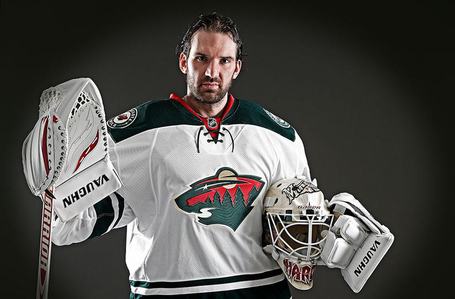 The new season starts in less than a month, and our coverage here at Hockey Wilderness is about to kick into high gear. Are you ready?