What to Expect from Erik Haula

Haula is maybe the most electrifying forward on the Wild's roster. What can we realistically expect from him this year?

Share All sharing options for: What to Expect from Erik Haula

Erik Haula made an impact last year, earning him the #8 spot on our "Top 25 Under 25" list this year. Just last Saturday, Haula released his speed upon the Winnipeg Jets, giving him the ability to show off this:

If you're at all a fan, you already know that Haula was the team leader of the Wild in Points-per-60 last year, at more than 2 points per 60 minutes played. In the playoffs, Haula played a shut-down role, yet was able to post an unbelievable 2.89 P/60 (second on the team only to Zach Parise).

Furthermore, as the two following usage charts will show, Erik Haula accomplished this with poor (though not awful) zone starts, mediocre-at-best teammates, and mediocre-at-best competition. 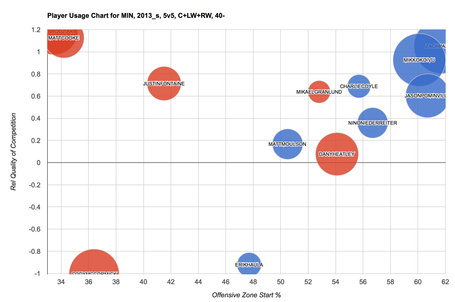 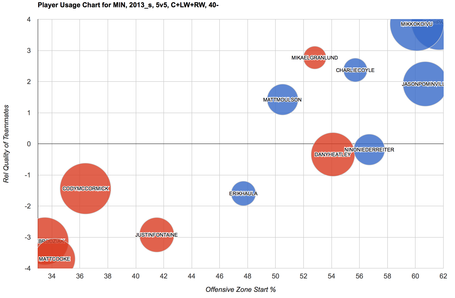 Here are those same usage charts for the postseason. In the postseason, Haula got tougher minutes (with worse zone starts than everyone except Brodziak, Cooke, and Veilleux). To be fair, Haula did not play against significantly with significantly worse teammates, though he did face easier competition than much of the Wild. 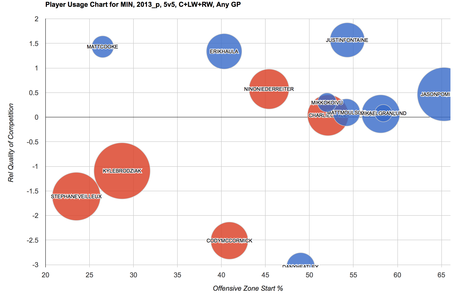 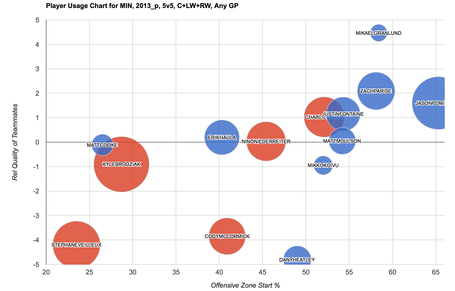 All charts from Some Kind of Ninja

The long and short of all this is: Haula played impressively well, considering he had moderately difficult competition and mediocre line mates. But unless you just crawled out from under a rock, you already knew that (it's just fun to remember). What I'm really interested in is what we can expect from him next year.

Unless something wildly unexpected happens, Haula will remain the 3rd line center. The change (hopefully) will be found in his Quality of Teammate. Right now, Haula is slated to have either Coyle or Niederreiter on his right wing. His left wing is slated to be Matt Cooke. Personally, a faster, more offensive-minded player would suit me: Michael Keraänen would, in my opinion, be a good fit. Fontaine, also, could be on Haula's right wing, and could be effective there.

His zone starts, likely, will continue to be less than ideal. With Haula's speed, however, that shouldn't be a huge issue. With competent wingers, Haula should be the center of a third scoring line. This is, of course, assuming Yeo doesn't stick Stu Bickel on his right wing (sorry, I couldn't resist).

For this segment, I'm going to use the "Season Finder" feature of Hockey-Reference. The goal here is to find some players who are similar to Haula. Because of his limited games (46) and his limited Time On Ice (467 minutes), this is difficult. For starters, I'll use his TOI. This is a few players who, in their rookie seasons, played fewer than 500 minutes. (Here's the source table for these numbers).

HERE is a search based on games played (fewer than 50) rather than TOI; it's quite similar. Haula scored the 14th most points of all these players, but only the 20th most points per game. Overall, Haula had the 17th most TOI of all players on that list.

Haula ranks 15th in Offensive Point Share- right between his total points rank (14) and points per game rank (20). Defense is where Haula's value shines: his 1.2 is the best of every player to play fewer than 500 minutes in his rookie season. In total point shares, Haula ranks 6th.

This, to me, indicates two things. Firstly, Haula is incredibly responsible, defensively speaking. He may not light up the boards with 50 goals in 2007, but he will likely have a decent GF%. Secondly, it indicates just how much he was relied upon for solid defense. Hockey-Reference doesn't generate Point-Shares for the playoffs, but if they did, I'm betting Haula's would be quite high.

The problem: there aren't many players that are exciting to out-perform. Call me crazy, but Haula producing better than Todd Fedoruk and Erik Christensen isn't exactly thrilling. The only name of note here is Jason Spezza, who out-performed Haula in every category save Defensive and Total Point Shares.

If, however, we were looking at Haula's 2.06 Points-per-60 (from War-On-Ice), the picture is brighter. Haula's 2.06 is better than Marian Hossa, David Backes, Milan Lucic, James van Riemsdyk, Jeff Carter... the list goes on. The question is if that rate would be sustainable for a full season, however; hopefully in 2014-15 we have a chance to find out. (A note- those numbers are based on 5v5 values)

If, however, we use Haula's Points-per-game (.33) and extend that out to 75 games played, we arrive at 24 points, which is better than David Backes, Tyler Seguin, and Mikko Koivu's rookie season.

Let's approach this from a different viewpoint. The two players who had rookie seasons most similar to Haula were Shawn Horcoff, Tomas Jurco, and Antoine Roussel.

Here are the statistics for the second seasons of two of those players. (Jurco, who's rookie season was last season, hasn't played 2 seasons yet):

Both of these players were defensively competent (note the identical DPS (Defensive Point Share). Their points-per-game were identical.

Because of how long ago his rookie season was, there's limited data for Horcoff's early play. Roussel's rookie Points-per-60 was 2.5 (at Even Strength). His second season's P/60 fell to 1.6. Roussel had harder minutes than Haula in his rookie season; he started in the defensive zone around 40% of the time, with a lower quality of teammate than Haula (though not by much).

Both Horcoff and Roussel produced more points their second year than their rookie year; Roussel doubled his point production, whereas Horcoff merely added 50% to his rookie total. However, Horcoff merely went from playing 452 minutes to 691 minutes in his first two years (from Hockey-Reference). Roussel, on the other hand, went from playing 367 to 1080 minutes. Roussel played far more his sophomore year than Horcoff (on a side note, in his 3rd season, Horcoff finally played more than 1000 minutes, and produced 33 points with a 1.4 DPS).

Because goals per game and points per game are so unreliable, let's look at scoring rates per 60 (these are all at even-strength) Shawn Horcoff's rookie season, his points-per-60 was 2.12. Look familiar? It should- Haula's was 2.06: very close. His next season, Horcoff scored at 1.91 points-per-60. In his third season, Horcoff played 1053 minutes, and scored at a rate of 1.88 points per 60. His rate dropped each season, but that can be attributed to his shooting percentage; 21% his rookie season and 14% his sophomore season.

In other words: Haula's scoring rate is far from unsustainable. We may well see a drop in his points per 60, but then again we may not. There's no reason to expect regression, however.

Based on the production of Horcoff and Roussel (as well as pure extrapolation based on Haula's numbers this season), we can expect between 22 and 28 points this season. This will include between 8 and 15 goals, and 15-20 assists. Erik Haula has significant upside, but with the players ahead of him on the depth chart, and with the wingers he will be playing with, predicting more than 25 points is rather optimistic.

Of course, if Yeo decides his 3rd line will not have a defensive focus, but will operate as a third offensive line, then this all goes out the window. In that case, 30 points may not be preposterous- but the limiting factor becomes not Haula himself, but his teammates. There is a significant drop in ability once you get past the top 5 wingers for the Wild. Cooke is a capable hockey player, but not an offensive dynamo. On his other wing, Haula is looking at one of Nino, Coyle, or Zucker. While Nino could be a very productive partner, he might be better used in the top 6. Coyle has not yet shown an ability to drive an offense, and Zucker has yet to show consistency in the NHL.

In short: a lot of what we can expect depends on his use, which is completely left up to Mike Yeo.

Whatever happens, we can be sure that Haula will be an exciting player for the years to come.