Wild Hits Early Season Stride and it's the Best One Yet

Share All sharing options for: Wild Hits Early Season Stride and it's the Best One Yet

Third. The Minnesota Wild are third in the league in Goals For per game. That's third place. In the NHL.

The Wild are currently scoring at a higher rate than they ever have in their relatively short history. At 3.4 goals per game, they are on pace for 276 goals for the season. What the Wild are doing is something they've never done before. 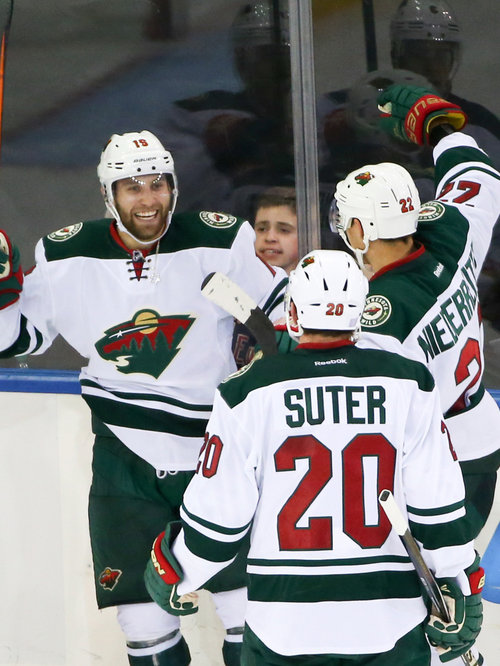 The Toronto Maple Leafs made a splash two years ago when they unexpectedly pushed the Boston Bruins to 7 games in the first round of the postseason. Last year, they looked likely to repeat, before crashing down the standings. Is Minnesota in for the same collapse this year?

What ever has changed in the Wild locker room should start with personnel. Minnesota has one of the best and deepest line-ups it has sported in its 14 year history. Sure, there were some fun teams and one that won a division title in 2006-07 that could pot goals. That team featured Marian Gaborik, Brian Rolston, Pierre- Marc Bouchard, and the shooting defensive tandem of Marek Zidlicky and Marc-Andre Bergeron. However, the Wild had guys like Branko Radivojevic, Derek Boogaard, and Chris Simon filling out the roster.

This season's iteration of the Wild has Jason Zucker, the speedy winger that played most of his games on the fourth line this season, as the leading goal scorer on the team. Thomas Vanek, a 278 goal scorer, was on the third line Thursday and Saturday night. Jared Spurgeon is spearheading the offensive production from the blue line.

Shooting with a purpose

The Wild have started shooting the puck with serious frequency in the first 10 games of the season.

Minnesota is finding ways to get the puck on the net and with the added emphasis on possession, the Wild goal scorers are reaping the benefits. Sure, Zach Parise is leading the team with 46 shot on goal, but when you see players like Marco Scandella, Jared Spurgeon, and Ryan Suter with 20 or more shots and the defensemen rounding out the top eight shooters on the team, it's easy to see how the Wild have made a serious jump in their shooting stats.

Ten games into the 2014-15 season and things are looking on the up and up with a Wild team that is as deep as it ever has been and putting an emphasis on shooting that has the team scoring goals at a higher rate than it ever has. The biggest importance is getting the effort night in and night out to sustain these results. We will have to see in April where the Wild stand.