Don't Blame the Offense for Losing

Share All sharing options for: Don't Blame the Offense for Losing

Offense has historically been the bane of the Wild's existence. They had struggled to score goals and get any meaningful offensive output  in years past. For the longest time, Wild fans and fans of other teams noticed the Wild have played incredibly boring, trap-style hockey. For the most part, they did.

But Mike Yeo has coached this team into a puck possession style team to play with the upper-echelon teams of the NHL. The Wild this year are scoring more goals per game than they have in any season of their existence. With 2.85 Goals per Game they are currently ranked 11th in the league. Had they finished with that same mark last season, they would have been ranked 7th. 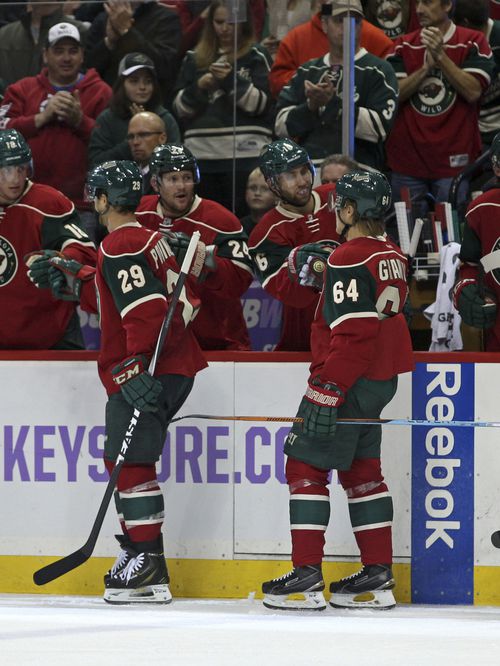 That's a huge jump in goal production considering just three seasons ago they were dead last in that category. Even the last two seasons, they were never ranked in the top half of the league. From the 2.02 GF/G in 2012 to the 2.85 this season, that's a difference of 68 goals over an 82 game season.

I recently read that among other things plaguing this Wild team, offense is right behind the goaltending issue. While this team is definitely capable of more, especially with the talent on this team, I feel like the offense is the only thing keeping this team afloat. Regardless of the putrid power play, the Wild are playing 4-3 games and 6-5 games rather than night after night of 2-1 and 1-0 type games.

Sure, there are stretches of games that frustrate the fans because the Wild can throw everything but the kitchen sink on net and can't seem to score. The power play was awful for an elongated string of games, and yet the Wild are able to find a way to score 2.85 goals per game.

Again, while this is not a number that would blow you away, when talking about the Wild, the scoring rate is solid. It's a scoring rate that is the best the Wild have seen in their existence. The only other season coming close to that mark was the 2006-07 in which they finished runner-up to the Vancouver Canucks in the Northwest Division.

So what is to blame for the lack of success in the "Win" column? Can everything else be blamed? While the defense has been on top of the league for most of the season for fewest shots on goal given up per game, there are still glaring defensive breakdowns.

Coaching decisions on personnel are maddening because the third pairing is brutal. Why isn't Nino Niederreiter, the teams leading goal scorer, getting more time on ice and more power play time? How many chances is Charlie Coyle going to get? All of that needs an answer because from an outside perspective, it just doesn't make the least bit of sense.

And sure, there are a number of fans ready to can Mike Yeo. However when you see the progress in the style of play and the goal scoring output, I believe the majority of the onus lands on the player's shoulders for failing to execute. If I was going to give a percentage on it, it would probably be like a 60/40% or 55/45% on the players and the rest on the coaching staff.

If Matt Dumba and Christian Folin had played well enough to force Yeo to play them every night, we wouldn't have had to see Stu Bickel or Justin Falk.

Frankly, Yeo is forced to make personnel decisions that don't quite make sense 1) because of injuries and illness, and 2) players just not getting it done on the ice. If Mikael Granlund had continued to make strides after a very successful sophomore year, or Charlie Coyle, with the millions of opportune chances he's been given, would show glimpses of the power forward we'd all like him to become, things would be different. If Matt Dumba and Christian Folin had played well enough to force Yeo to play them every night, we wouldn't have had to see Stu Bickel or Justin Falk.

And while General Manager Chuck Fletcher has gone on record saying that a trade is unlikely, it's up to the players to figure out how to get back into the playoff picture. They need to show that they are deserving of help for Fletcher to make any addition to the roster.

A win against the Jets last night is a great step in the direction they need to head the ship, but it's going to take everyone pitching in to get the job done.