[Wild About Numbers]: What Are The Wild's Strengths & Weaknesses In 2014?

Let's take a look at some team-level advanced statistics to see which areas the Wild succeed in and which they fail in.

Share All sharing options for: [Wild About Numbers]: What Are The Wild's Strengths & Weaknesses In 2014?

The most predictive stat to use for team success is "Score Adjusted Fenwick". It's proven to be marginally more predictive than Fenwick Close and Fenwick Tied after 60 games and much more predictive early in the season.

-Here is every NHL team ranked by their Score Adjusted Fenwick so far this season:

-The other stat that's important here is PDO. Teams with a high PDO at ES can over-achieve beyond their poor puck possession numbers while teams with great underlying numbers can struggle due to the percentages:

-Here's a visualization of the Wild's puck possession struggles as the season has gone on just in case you've forgotten: 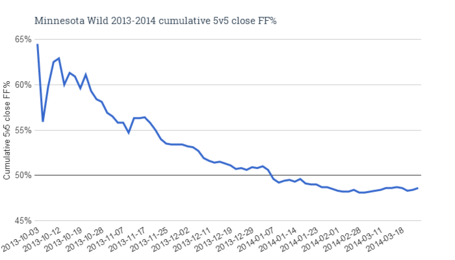 -Here is how the Wild performed at 5v5 at home vs on the road. These numbers are just regular 5v5 because home/road spilts aren't available for Score Close situations or Score-Adjusted:

-Finally, here is how the Wild have performed at special teams in the last 3 seasons:

(P.s. I'm gonna be out of town for a few days so I don't think there will be a 'Wild About Numbers' article on Thursday. You'll have to make do with this one until next week.)