Rules and Inconsistencies in the NHL

Gabriel Landeskog was guilty of nearly the same thing in Game 5 of the Western Conference Quarterfinals that Daniel Carcillo did. Yet, it's Carcillo that is suspended and Landeskog got nothing.

Share All sharing options for: Rules and Inconsistencies in the NHL 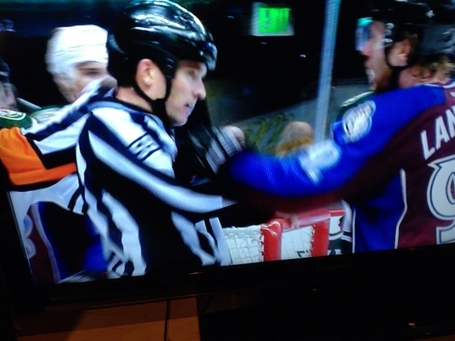 Remember this little move by Gabriel Landeskog? Yeah, there should have been an automatic suspension for that little altercation with the linesman.

The NHL just showed how ridiculous it can be when actually laying down the law and doling out punishment. Daniel Carcillo went into spazz-mode when he was being escorted by a linesman

Carcillo faced a maximum 20 game suspension for his altercation, but the NHL only handed out a suspension half that length. Gabriel Landeskog was neither ejected nor suspended for his contact with an official. In that same game, he proceeded to accost Mikko Koivu by trying to take his stick, and then when Koivu said, "No, you can't have my stick," Landy jumped him from behind and proceeded to shove Koivu's head into the ice.

If there are rules to protect players and the officiating crew, then there needs to be consistent punishment for the crimes. 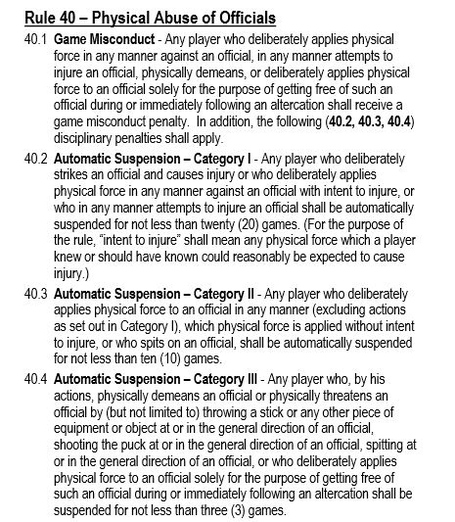 The league looked the other way with Landeskog because he is a budding star and one the Avs' top players. Daniel Carcillo cannot be classified as such and so they (sort of) threw the book at him.

It becomes a serious issue when the NHL is not consistent with the supplemental discipline they dole out because, just like in games, players adjust to the way the game is being called. It's ridiculous that it is a complete guessing game as to how long a player will miss time when something happens on the ice.

If it's hard for you to determine what supplemental discipline should be, then what do you think the franchises and players think?