Two former Wild 1st rounders gave been dueling it out here in the SCF.

We're approaching dark times here in Minnesota Sports Land, for within the next week either Marian Gaborik or Benoit Pouliot (BOY does that name bounce) will be lifting the Stanley Cup. Yep. Talk about worst case scenario.

As someone whose username typically runs along the lines of DashLovesGaborik/DashLovesGabby, I would absolutely, with out hesitation, be tipping trash cans all across North America if Gaborik won the cup.

In other news, Ryan Johansen is RFA. A right handed playmaker. With size. Who is right handed. Who scored 30 goals. While being right handed. On the fucking BJ's. Not to say Colombus isn't a good hockey team, I actually am in love with how the team is built, but they only had two other 20 goal scorers (21, 22).

Yesterday, the oh-so wonderful Dakota Case put up a piece on how P.K. Subban(man) is EXACTLY what the Minnesota Wild need! Other than the obvious "@so does every other team@", I believe the wild already have a discount-P.K. in the wings in Matt Dumba. So for less resources, we go after Johansen with a with our projected d-core in tact and I think we come out as either just as good or slightly better than the Minnesota Subban's and co. Although P.K. is a game-breaker, I like depth. I don't really like the idea of giving up Brodin, Coyle, and a first when we could get better while keeping those resources. 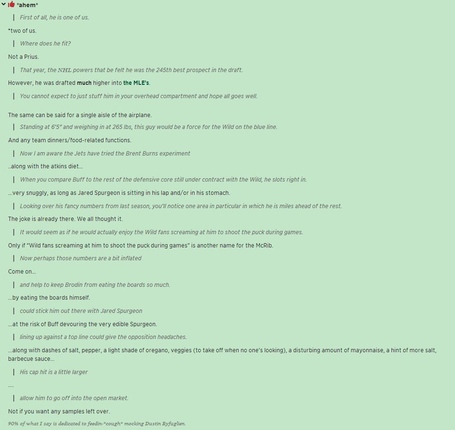 Mikko Koivu, already past you!

Conn Smythe Watch: Can Henrik Lundqvist do this 3 more times? | Puck Daddy - Yahoo Sports
Can he? Yes. Will he? Hmmm....

Catching Up With the Cup

Blue Jackets prepared to match any potential offer sheets for Ryan Johansen | Puck Daddy - Yahoo Sports
The aforementioned Johansen won't be easy to pick up, however.