Continuing our series on potential Wild trade targets, here's why I think Jeff Petry would be a smart pick-up for the Wild this Summer.

A lot of the players we have talked about in this series are stars or at least very well known by fans around the league. Jeff Petry, on the other-hand, is kind of obscure. I'm sure most people know him as being a mainstay on garbage Edmonton Oilers teams over the last few years.

Who Is Jeff Petry?

Petry is a 26 year old defenceman (turning 27 in December) from Ann Arbor, Michigan who was drafted by the Oilers in the 2nd round back in 2006. After 3 years at Michigan State University, he turned professional with the OKC Barons in the AHL in 2010/11, playing 41 games with them and 35 with the Oilers. He's been a permanent fixture for the NHL club over the last 3 seasons, scoring 59 points in 236 NHL games.

He's a puck-moving defenceman who skates well, plays a smooth game in his own end, possesses a hard shot and can jump into the play. He's a big guy (6"3, 200lb) but doesn't play with any notable physicality or nastiness.

Something I have noticed all year is that Jeff Petry seems to be the #1 scapegoat for a large part of the fanbase and the media...

I follow a lot of Oilers fans on Twitter and I read several Oilers-centric blogs, partly because I enjoy the content, but partly because I'm fascinated by how horrible and crazy everything in and around that franchise is. It's a fantastic soap opera. Something I have noticed all year is that Jeff Petry seems to be the #1 scapegoat for a large part of the fanbase and the media (even more than Ales Hemsky!). Mark Spector in particular has been all over Petry this season accusing him of being soft, unreliable and a turnover machine. This sounds like the standard MSM criticism of any puck-moving defenceman who plays for a bad team and doesn't play a physical game and, given the source, I'm gonna take it into account in my analysis about as much as I take Souhan's opinion on Wild players into account.

Knowledgeable Oilers writers such as Jonathan Willis and the guys over at The Copper & Blue see Petry as the team's best defenceman and head coach Dallas Eakins seems to rate him pretty highly too.

This video features some very good quotes from Eakins on Petry and defencemen in general (and also an awesome subtle diss on the Avs at the end):

Eakins seems like a pretty cool guy. I really hope he finds some success in this league before the Oilers give him a nervous breakdown.

Is This Petry Guy Actually Good?

-Here are some of his stats from the season just gone as well as where he ranked among the 6 Oilers defencemen who played a significant number of games:

As Eakins said in that video above, Petry is the guy he puts out there against the opposition's top lines in the defensive zone and in key PK situations.
-Check out his difficult deployment this season: 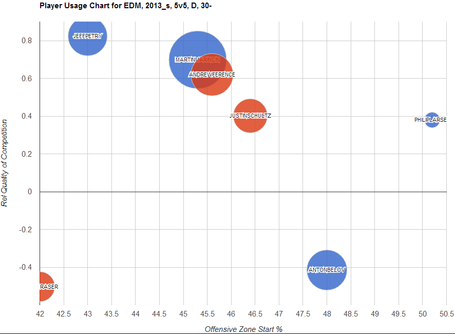 More: Minnesota Wild Trade Targets 2014 [StoryStream]
This article by Bruce McCurdy makes some really good points about Petry. Here are some choice quotes:
-On the Oilers approach to their older defencemen:

Far too often the punchline has come when the Oilers have sent said youngster on his way elsewhere after several years of learning the ropes here in Edmonton. Just since Gary Bettman's Lost Season that group has included Matt Greene, Marc-Andre Bergeron, Tom Gilbert, and most recently, Ladi Smid, all of whom went on to become contributing veterans of other NHL squads.

-On his basic skillset:

He remains a work in progress, but he is 2+ years ahead of every other work in progress in the system. Already, he brings plenty of valuable skills. For starters, he's got good durability, missing just 3 games to injury in his NHL career while being a 21-minute-a-night workhorse pretty much since the day he arrived. An excellent skater, Petry has proven to be the Oilers' best defenceman at clearing the defensive zone, both at even strength and on the penalty kill. He has become the go-to defenceman of three different coaches for taking on the important defensive assignments.

-On his tough usage over the last 3 years:

For the third year in a row (of his three full NHL seasons), Petry and his primary partner ranked 1-2 on the Oilers for Quality of Competition. Eakins further toughened his load with harder zone starts [...] yet [Petry] managed to maintain a decent shot share at least in comparison to his own teammates.

-On his poor raw points totals:

Cult of Hockey colleague David Staples' study of contributions to scoring chances had Petry as a small net positive, decent for a defender of any stripe and especially for one drawing tough defensive assignments. For all that the lanky rearguard is labelled "soft" in some quarters, he comfortably led all Oilers in hits and blocked shots, and all defenders right across the spectrum of real-time stats:

As I mentioned earlier, there are a lot of Oilers media types and fans who dislike Petry and would like to see him traded. As always, it's hard to know how the Oilers management feel about him, but I think they will be busy in the trade market this offseason. They are desperate to turn this franchise around now that fans patience has finally run thin thanks to a rebuild that is dragging on into a "second term". Trading a much-maligned defenceman for a shiny new toy might be exactly the kind of thing that makes sense to them.

Another factor to consider is that Petry is an RFA coming off a 2-year bridge deal at $2.7 million per year. Rather than negotiating a new 3 or 5 year deal, McTavish might just pull the trigger on a trade for someone else. I feel like the Oilers could view any change as good change right now and I can't see a more clear-cut trade piece than Petry on their roster.

The Wild could do with another reliable right-shot defenceman to help alleviate pressure on Suter next season and to improve the 3rd pairing from the disaster it was last season. The Wild have Suter, Brodin, Scandella, Spurgeon and Ballard returning with college UFA signing Christian Folin as well as youngsters Gustav Olofsson and Matthew Dumba joining the fold to compete for spots, improving the blueline drastically. The huge liabilities that were Clayton Stoner and Nate Prosser will likely not be re-signed and leave as UFAs, making the defence better by subtraction. It would be ideal for 2 of the 3 young defencemen to start the season in the AHL, so that means there would be 6 defencemen on roster, 4 lefties and 2 righties (presuming Olofsson doesn't make the NHL roster).

They need another defenceman to bring that number to 7 and preferably a right-shot one. They could always sign some cheap and nasty guy for a year but, with Ballard's struggles last season in terms of health and performance, it would be ideal for him to be the 7th d-man and for the Wild to bring in someone like Petry who probably wouldn't cost much and can actually play....quite well.

With Petry in the fold, they could run pairings like this:

Petry was leaned on about as hard as any young defenceman could ever be leaned on during his time in Edmonton and still did quite well. Imagine what he could do in a more sheltered role in Minnesota where he's playing behind a far more stable group of forwards with a deep defensive corps and a top pairing taking the tough assignments leaving him to play far more favourable minutes? I think the results would be phenomenal and, importantly, he can move up and down the pairings when injuries occur (something that I think is vital for a non-top pairing defenceman) while also playing big minutes on the PK and secondary minutes on the PP.

So, what do you think, Wilderness? Would the Wild have any shot at trading for Petry? If they did, would he be a good fit? What do you make of him as a player? Leave a comment with your thoughts.