Continuing our series on potential Wild trade targets, I give a nod to Brad Marchand, the last of our honorable mentions before we start counting down the top-10.

I'm sure everyone has an opinion on Brad Marchand as he has carved out a reputation as one of the most detestable players in the NHL over the last few years. For this article I'm going to try and focus on his play and not the antics that surround it. Marchand is a 26 year old LW who can also play centre. He has been in the Boston Bruins organisation for his entire career and has been a solid goalscorer and penalty killer since he became a regular in 2010/11. Aside from his energy and solid two-way play, he is most known as a pest. He aggravates opponents by playing on the edge and has a reputation for embellishment and other antics that have turned fans around the league against him.

What Kind Of Player Is He?

-Here are some of his stats from the season just gone as well as where he ranked among Bruins players in some key ones:

So, it would appear Marchand can score goals (something the Wild desperately need). In fact, over the last 4 years, he is 32nd among forwards in G/60 at 5v5, wedged between Alex Oveckin and John Tavares. Even more impressively, he is 18th in P/60 over that same period. That's some great production.

-Here's his yearly production rate so far in his career: 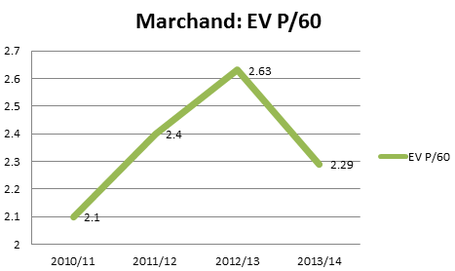 -Here is how his personal CF% at 5v5 Close has compared to the Bruins overall each season: 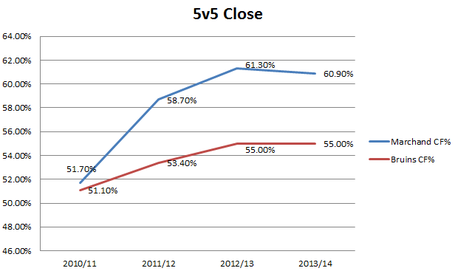 Marchand's fantastic possession numbers are impressive, but there's a strong chance that they are a result of playing with Patrice Bergeron, one of the best players in the league.

-The following chart shows Marchand's numbers with and without Bergeron from 2010 to 2014:

As I previously mentioned, he has a reputation for his penalty killing ability and there are some interesting stats to back this up. His CF% on the PK over the last few years is intriguing, suggesting he gets play going the other way while shorthanded better than most though, once again, Patrice Bergeron happens to also be high on that list suggesting he might be aiding Marchand there. If there is one thing Marchand does excel at, it's scoring while shorthanded. His scoring numbers are fantastic.

Marchand is coming under fire from sections of the Bruins media for his performance in this year's playoffs in which he didn't score a goal in 12 games (though he still registered 5 assists) and took some untimely penalties. There seems to be a belief around the Bruins camp that he now has a reputation with the refs and needs to dial back on the agitating to avoid hurting his team. This is the 3rd consecutive season in which his performance in the playoffs has been criticised and the 2nd consecutive offseason in which his name has been heavily involved in trade rumours.

It's hard to know if he's actually available, but the Bruins will be looking for a way to get back into the Cup final next season before Chara has declined too much and their window closes. They will more than likely be looking to bring in another defenceman who can move the puck effectively and some guys with a reputation for showing up in the playoffs. Marchand hasn't scored a goal in 20 playoff games and that could work against him. Peter Chiarelli showed last Summer with the Seguin trade that he isn't afraid to make a big move and, if they wanted to acquire someone like Keith Yandle it might cost them Marchand.

If Marchand is getting moved, then I think it's for an NHL player, not picks and prospects.

If the Wild were to acquire him, they could possibly avoid signing Thomas Vanek and use Marchand as their 2nd line LW, or maybe bring in both and have Marchand as their 3rd line LW to give them some insane scoring depth. To be honest, I don't think they would have the resources to bring him here in the 1st place. Maybe some kind of trade package could be built around Charlie Coyle, but I think the Bruins would want more proven talents or at least a 1st round pick that they could then flip in another trade.

Marchand's contract runs for another 3 years at $4.5 million per year, expiring when he is 29. That term isn't too bad for a guy who is far from being past his prime and, messing around on CapGeek, it seems like the Wild would be able to take on his contract without going over the cap (that roster presumes that Coyle, a 2015 1st and some bits and pieces would be enough to get him).

So, what do you think, Wilderness? Would the Wild have any shot at trading for Marchand? If they did, would he be a good fit? What do you make of him as a player? Leave a comment with your thoughts.