The Finals are set to begin tomorrow... for today, we sit, we wait, we endlessly over-analyze the rosters...

Well, Wilderness, the matchup is in, we've gotten over (or had time to revel in) the Blackhawks' loss, and now we just have a little over a day to wait. In light of this fact.... enjoy the musical stylings of Mr. Colm Wilkinson:

Rangers. Kings. Will Kopitar and his band of hobbits defeat Martin St. Louis and the forces of Mordor... err... New York? Or will Frodo fail, and fall into the fiery depths of Madison Square Garden, along with their hopes of a ring (and a cup)? 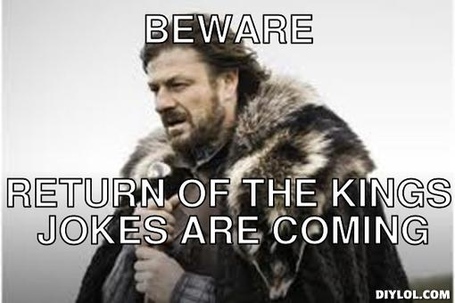 Gone Puck Wild: Like His Team, Mike Yeo Develops with Each Passing Season- I do love Mike Yeo. He earned his extension, and could do great things (if the special teams get figured out).

Gone Puck Wild: MN Wild A-Z: Cam Barker- Not a name many of us want to remember... but an important reminder: being drafted high does not guarantee success.

Team of 18,001- Season in Review: Clayton Stoner- Giles breaks down Stoner's season.... hopefully his last with the Wild.

Team of 18,001- Season in Review: Matt Moulson- Giles looks at Moulson's season. Though he was missing in the playoffs, I wouldn't hate seeing him back in the Red and Green next season.

Puck Daddy: 5 Reasons the Rangers Might Not be Royally Screwed vs Kings- Hey! A Kings pun that isn't about Lord of the Rings!

SB Nation: Why the Rangers Shouldn't Be Counted Out- For many hockey fans.... too late.

Jewels From the Crown: Kings/Rangers: The Head Coaches- JFTC Breaks down the head coaches of the final.

Blue Shirt Banter: Rangers/Kings: It's Good to Be Bad- BSB's take on the matchup. Gotta love their spunk and passion.

The Score: How the Rangers Can Beat the LA Kings- If they're looking online for answers, they have some problems.

Puck Daddy: Kings/Rangers: Who Has the Better Defensemen?

Puck Daddy: Kings/Rangers: Who Has the Better Captain?

Grantland: The Fall of the Hawks, the Return of the Kings- They went there (but I went there first)

The Hockey Writers: The Next Ones: Eric Cornel- THW continue their draft coverage. Check it out!

Sports Illustrated: Time to Redefine 'Dynasty' after Chicago Fails to Repeat- Well, that was fast...

Puck Daddy: Vanek Quietly Blames Therrien- Maybe he should have been watching his OWN practice (zing?)

The Hockey Writers: Why the West is Best (Again)- It would be fair to say that the Western Conference is more capable than the East. Here's why.

ESPN: Blackhawks Run Out of Ways to Win- Much to the joy (or dismay) of fans everywhere