New signing Guillaume Gélinas answers some short questions for us.

After a couple of weeks of speculation, the Wild signed 21 year old QMJHL defenceman Guillaume Gélinas to a 3 year entry level contract on July 1st. Gélinas has just completed his 4th full season with Val-d'Or Foreurs and had his best year yet, scoring 92 points in 67 games which earned him the Emile Bouchard award for the league's best defenceman.

Guillaume was kind enough to take time out of what has surely been a hectic few days for him to answer some questions for us (in his 2nd language, no less).

Q1.  Firstly, how would you describe yourself as a player?

"I would describe myself as an offensive defensman that jumps into the rush and loves to play on the PP, but I am also responsible defensively."

Q2.  When did the Wild make you aware that they were interested in signing you?

"Around the last days of March, my agent told me the Wild was interested." 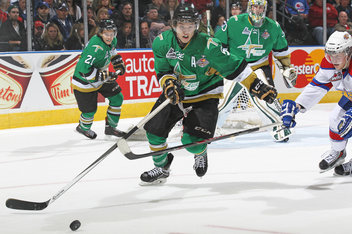 Q3.  Do you know much about the Minnesota Wild team?

"I don't know much about the team but I watched them play a couple of times and I was pretty impressed with their game. It's a very good team."

Q4.  Wild defenceman Marco Scandella played his last season for Val-d'Or Foreurs the same season you joined the team. Did you two ever play together?

"I didn't play with him because at the time he was an elite player in the Q and I was only an AP with the team but I talked to him a couple of times."

Q5.  Finally, as an undersized defenceman, is it encouraging for you to see players who share similar physical attributes to you such as Jared Spurgeon and Torey Krug succeed at NHL level?

"Yeah for sure. It's encouraging because as an undersized D, I watch them play and I want to follow them and it's not because you are small that you can't play in the show and they are the proof."

Many thanks to Guillaume for doing this interview and best of luck to him next season. You can follow him on Twitter @Gelli5.