Today's Bold Prediction is about one of this community's favorite defenseman: Jared Spurgeon. The baby-faced, diminutive point man is sitting on a big year.

Bold predictions are really hard to come by without ending up in the Preposterous Statement Tournament. Sure, you like to go out on a limb with projections but you don't want to sound like an Avalanche fan by basing your projection off of blind fandom. Luckily for us Wild fans, Forest Green and Wheat are not Kool-Aid flavors.

Today's bold prediction is about Jared Spurgeon, a guy that looks like a player's kid, but plays like a 7 year vet. I predict that Spurgeon will match Ryan Suter's production from last year of 8 goals and 35 assists in 2014-15.

"But he's a small guy that can't possibly handle himself on the ice against the big boys!"

Actually, outside of a dirty, flying elbow from Alex Tanguay that would have been suspension worthy that caused a concussion and sidelined him for 9 games in 2012, a dirty hit from behind by Cody McLeod that forced Spurgeon out of the lineup for two games with a lower body injury in December of the same year, then last season with an ankle injury after blocking a shot, Spurgeon has been effective at playing good defense and evading big checks from big players.

It's tough to say his size has anything to do with the types of hits that had sidelined him in 2012. An illegal hit is an illegal hit and can't be something that anyone can possibly defend against no matter the size of the player. Then last season, a number of prolific Wild players like Mikko Koivu and Zach Parise were sidelined with the same kind of ankle injury that Spurgeon was after blocking a shot.

"Spurgeon hasn't surpassed 30 points once in his career, what makes you think that he can match the 43 points that Suter had last season?"

His .88 P/60 at 5v5 is .01 behind players like Niklas Hjalmarsson, and P.K. Subban, and better than Zdeno Chara, Jake Muzzin, Cam Fowler, Niklas Kronwall, and Oliver Ekman-Larsson.

It is true that he hasn't eclipsed 30 points in a season yet, coming four points shy last season with 26. However, his .38 points per game extrapolated over an 82 game season would have finished with 31 points had he kept the same rate and not missed those 15 games last season. His .88 P/60 at 5v5 is .01 behind players like Niklas Hjalmarsson, and P.K. Subban, and better than Zdeno Chara, Jake Muzzin, Cam Fowler, Niklas Kronwall, and Oliver Ekman-Larsson. His G/60 and A/60 were the highest they've ever been in his short 4 year NHL career last season.

This past post-season was kind to Jared as well. He netted career post-season highs with three goals and three assists in 13 games. His shots on goal per game improved from 1.36 in the regular season to 1.69 in the playoffs which suggests he is finding ways to get his shot on net more often. With a good set of forwards in front of him and a rock of a defensive partner in Suter, he should be able to find a lot more offensive zone time and hopefully more looks at the net.

Plus, his right-handed shot should be featured on the point in the power play more often.

"Ok, he had a good playoffs and decent regular season, what makes you think he will take another step forward?"

Jared Spurgeon will only be 25 years old this November. He is only beginning to enter his prime. With four years under his belt already, being paired with one of the better defenseman in the league, and a forward group that should offer more of a scoring threat among all four lines, he should get ample opportunity to be on the score sheet more often by being more active in the play.

This brings me to another point. The Wild under Mike Yeo have looked to activate the defensemen in the offensive zone since Yeo took over as bench boss three years ago. Being hamstrung by terrible 3rd pairing defensemen like: Nate Prosser, Clayton Stoner, Justin Falk (luckily Falk is no longer apart of the tea....Wait. He's back? You're kidding, right? No? Okay then) for most of his tenure with the Wild, he's been forced to pick up some of the slack. Now with some better options to man the 3rd pairing into this season, you would hope to see Spurgeon utilized for matters on the offensive side of the puck more often.

If there's anything to point to that says Jared Spurgeon is sitting on a breakout season, it's the fact that he was the Wild's best possession defenseman 5-on-5 all season long while facing the second toughest competition. 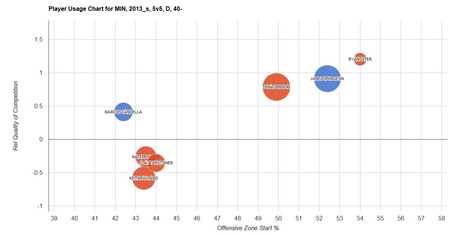 As the best possession defenseman for the Wild, it's only a matter of time before he reaps the benefits of the added zone time and more prolific teammates. Patrick Kane gave him some really big kudos after the Wild were eliminated by the Blackhawks in the Western Conference Semifinals and in 2014-15 he will show us why he was deserving of that praise.