For the next two weeks, Hockey Wilderness Staff and Friends will be profiling our favorite video games. We start with NHL Hitz 20-03.

One of the best aspects of hockey fandom are the video games. From the release of Nintendo's Ice Hockey in 1988, there have been a wealth of hockey games that have made an impression on casual and die-hard hockey fans alike. During Hockey Wilderness' Video Game Week, we'll be re-visiting our favorites. We start with NHL Hitz 20-03. 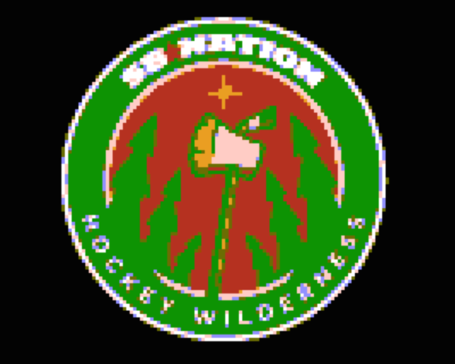 Just like professional sports, and real life in general, money has kind of ruined hockey video games. While we once saw multiple gaming companies creating hockey games, giving their unique takes on the game, and pushing each other to innovate, we are stuck with a monopoly now. While EA's NHL series are very good games (we'll be seeing some of them profiled during these next two weeks), their exclusive partnership with the NHL has left no room for other developers to provide their own spin on hockey video games.

Midway Games' NHL Hitz series is exactly the kind of fun, unique game that got killed off by exclusive rights. While the trend over time with hockey games has been to continually strive for realism, Hitz went in the opposite direction. NHL Hitz eschewed realism to give us everything we love about hockey in its purest, most visceral form. The small rink sizes and 3-on-3 action ensured that either team was a mere 5 seconds from a scoring chance. The action was almost continuous, due to the game completely doing away with icing, offsides, line changes, and just about every penalty imaginable.

And, oh yeah, NHL Hitz lived up to its name. It was a violent game. Without the Department of Player Safety, Rule 48, and concussions, you could plaster even Eric Lindros with impunity and a clear conscience. The game made "Old Time Hockey" as fun and rewarding as deking out a goalie or setting up a one-timer. The combination of speed, skill, and pugilism was (and still is) unparalleled among hockey games. 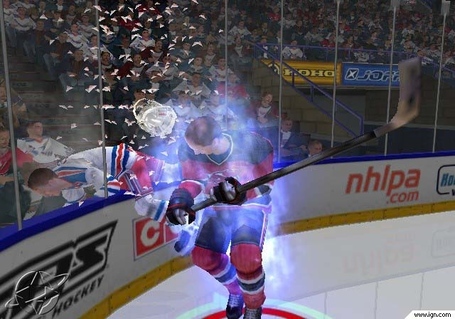 Let 'im know you're there! (via assets1.ignimgs.com; IGN.com)

I first discovered Hitz in my freshman year of college. My roommate Mitch owned a GameCube, and I picked up the game one day. Mitch and I never became best buds- we may have said less than 2,000 words to each other that year- but I'll always be grateful to him for introducing me to NHL Hitz 20-03. I got beaten pretty badly in my first few games against Mitch, but even 5 years after its release, the gameplay was fresh and fun enough that I set out to master it.

Like most great games, Hitz 20-03 is easy to learn, and difficult to master. A Scotty Bowman-aided tutorial will teach you how to do just about every maneuver in the game in minutes. The tricky part is executing those moves in-game, where even the AI tenaciously goes after you. After completing "Hockey School", I started playing the Franchise Mode, where a player creates a team and sets out to complete various challenges against increasingly tough opponents. Upon completing that, I had the Hitz skills to pay the Hitz bills.

After Mitch and I parted ways, I found a copy of Hitz 20-03 in a local used game store, and I was able to introduce the game to two friends, Lucas and Dan. The "pick-up-and-play" nature of the game quickly allowed them to be formidable opponents. It was then that the game truly shined. It proved perfect to be played between close friends, as the heightened action on the ice created profanity-laced rivalries every bit as intense as your most competitive fantasy leagues. 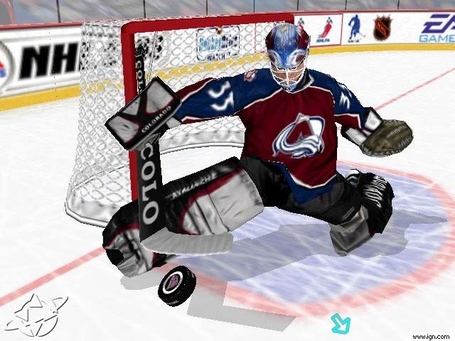 With Andrew Brunette as a playable character for the Minnesota Wild, you can end Patrick Roy's career all over again! (via assets1.ignimgs.com; IGN.com)

It's truly a shame that the Hitz franchise hasn't received an update in over 10 years. It was made for players like Alex Ovechkin, Shea Weber, and Patrick Kane, and I think the arcade-style, tournament-friendly hockey game would find a wider audience than it did in 2002. It may seem like a long-shot for Hitz to see a revival, but EA did re-make NBA Jam (also a Midway game) in 2010 and it was successful enough for EA to make a follow-up in 2011, so there still may be hope for Hitz die-hards.

In the meantime, you can probably find NHL Hitz 20-03 at a used game store or Amazon for under 15 dollars. If you have a PS2, Xbox, or GameCube, it's well worth your money and time. As for team recommendations, San Jose (Teemu Selanne and Owen Nolan), Carolina (with my favorite Hitz player, Ron Francis and Sami Kapanen), and Boston (Joe Thornton and Brian Rolston) were some of my favorite teams to play.

If you're diligent and lucky enough to obtain a copy, congratulations! You'll have your hands on an exciting, fast-paced, and fun game. Just the way hockey is supposed to be.

Did you also have an experience with NHL Hitz 20-03? Is there another game you'd like to see us profile during Video Game Week? Let us know in the comments, or even leave a Fan Post about your favorite hockey video game!

We would like to thank Super Pixel Time, whose website we used to create the 8-bit Hockey Wilderness Logo.