Who Do Minnesota Wild Fans Hate Most?

Is the NHL Hate Map right in saying that Minnesotans hate the Blackhawks most?

Share All sharing options for: Who Do Minnesota Wild Fans Hate Most?

Yesterday, an NHL Hate Map made the rounds on social media. Through a state-by-state and Canadian-state-by-Canadian-state poll on Reddit, it was geographically determined who hated who. These are the results: 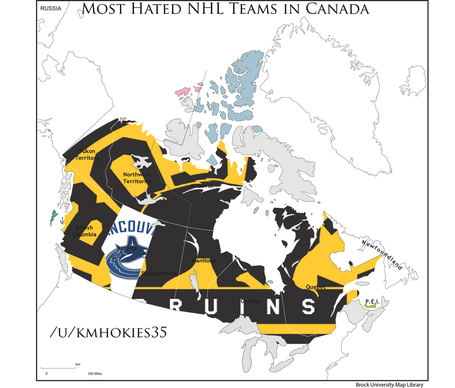 The map shows that Minnesotans, like most of the Midwest, chose Chicago as the team that they hate most. But is this accurate?

Or more specifically, is this accurate for Minnesota Wild fans? Minnesota has a geographic proximity to Chicago, and in the old Norris Division, the Blackhawks and North Stars had an intense, long-running rivalry. The Wild and Blackhawks, however, have been playing in different divisions for the majority of the Wild's existence. There's been little time to build a fierce rivalry. It doesn't help that the two playoff series the teams played against each other have either been utterly non-competitive (2013), or devoid of bad-blood building moments (2014).

Since I'm not entirely convinced the Blackhawks are the most hated team among Wild fans, we'll be taking a look at hated teams around the Wilderness, and we'll let you decide who our fanbase hates the most.

The Chicago Blackhawks are unquestionably the team to beat in the Central Division, working their way to the top the way every great team in this league does: With savvy moves that weren't at all aided by being terrible for a really long time. Jonathan Toews and Patrick Kane are ridiculously good, so screw them! They've ended the Wild's season two years in a row. They gave the Wild Cam Barker.

Chicago is good, but the games between the teams, even in the playoffs, seem friendlier than a hard-core rivalry should be. This is most apparent at the end of the Wild-Blackhawks Semifinal series, when Patrick Kane spoke glowingly about the Wild.

That's kind of the feeling you get in these Blackhawk-Wild games. There's no "Wakey, Wakey Backes" moments. No bad blood. Just a lot of respect between the franchises.

So, it's that, and a lot of our staff likes Jen from Second City Hockey (@RegressedPDO). Also, Ger's brother is a Blackhawks fan, and it ain't like he can bust a cap in his ass, and not hear about it come Thanksgiving time. For real, Ger's living life with some burdensome siblings. So what the hell?

The Avalanche are the only team that has been in the Wild's division since the Wild's inception. That's an extra few years to build up a rivalry. They've run into the Avalanche in the playoffs three times, more than any other team. Joe Sakic was second to only Jarome Iginla (who the Avs just got, by the way) in Wild Killing. But the strongest amount of hatred between the two teams (and fan bases) came in their most recent playoff match last season. That playoff series was great, with thrilling, controversial late-game victories by Colorado in Games 1 and 5, OT heroics by Mikael Granlund and Nino Niederreiter, and a bad-blood creating play with Matt Cooke's hit on Tyson Barrie. If this is a sign of things to come, this will be a great rivalry.

Uuuuuuuuuuhhhhhh... Cheryl Bradley of Mile High Hockey was really cool during Episode 4 of our podcast. My friend, Dan is an Avs fan, and it's fun to watch him break his phone during Avs games. The Wild have actually gotten the better of Colorado two out of three times in the playoffs, so that garners a little bit of good will.

They took our team! THEY TUK ER TEAM! DEY TUCH R TEEEM! DERKADERP! In case you haven't heard, the Minnesota Wild didn't always exist. Before that, there was a team called the "North Stars", and they had Neal Broten, Mike Modano, and like, 5 other people. An evil man from Winnipeg named Norm Green moved them to Dallas, and it was very sad. Even sadder when that team won the Stanley Cup 6 years later, something that hadn't been accomplished by the franchise in the North Stars era.

In the early days of the Wild, fans got psyched up for games against the Dallas Stars, most notably the first game Dallas played at the Xcel Energy Center, where the Wild's 6-0 victory provided much-needed catharsis for former North Star fans. But after that? Sure, Steve Ott is a jerk, and the Wild had a long winless streak in Dallas, but there's nothing really noteworthy to this rivalry.

The Stars are looking to be an up-and-coming team, and being in the same division could certainly change things in that regard. Inevitably, fighting with each other for playoff spots, and matching up with each other in the playoffs will build a rivalry. But you know what? I don't really want to hate the Stars. They've built a fun, young team, and they did it without tanking hard core like the Blackhawks, Penguins, and Avalanche. I've got mad respect for that.

When this rivalry was good, it was the best the Wild ever had. The first major moment came in the 2003 playoffs, when Todd Bertuzzi's Canucks had a 3-1 series lead on the Wild. After Game 4 Bertuzzi taunted Wild fans waiting in line to buy tickets, saying that the series would be finished after the next game in Vancouver. The Wild made Bertuzzi eat those words by shelling Dan Cloutier to the tune of 15 goals in 3 games, winning the series. The ever-charming Todd Bertuzzi, ladies and gentlemen...

The second incident came in 2008 when Vancouver defenseman Mattias Ohlund broke Mikko Koivu's leg with a two-handed slash. Koivu would miss two months of the season. But this wasn't all terrible news for Minnesota. In Koivu's first game back in Vancouver he scored what would eventually be the game-winning goal, and then skated to the Canucks bench to let out a scream. Ohlund had unwittingly unleashed upon the world the beast we now know as #AngryMikko.

After 2008, Vancouver would become really, really, ridiculously good at hockey, and the Wild would have to go to the Derek Zoolander Center for Teams That Can't Play Hockey Good and Wanna Learn to Do Other Stuff Good, Too. So, those games tended to not have the same meaning they used to. Then, Vancouver and Minnesota were split up last year, joining different divisions. Guys like Bertuzzi, Ohlund, Ryan Kesler and Matt Cooke are no longer with the team, and while Alex Burrows still sucks, it's just not the same. This rivalry is dead.

Winnipeg is the closest NHL team to Minnesota, and they have a fervent fan base that matches Minnesota's passion about hockey. Winnipeg fans are known to travel to the X, and like Yeerks, they try to infest it and create a home-ice advantage for their pretend Jets.

They were the Thrashers until two years ago. And at this point, the off-ice rivalry is stronger than the on-ice counterpart. The Jets could easily be the Wild's biggest rival, maybe even as soon as two years from now, but in order to do that, they're simply going to have to get better. (HINT: Get a new goaltender.)

They're the Flyers. Or the Penguins, Blues, Red Wings, Ducks, Kings, or whoever else you hate. Or they're the Flyers. That's right, I said it twice. Screw the Flyers. They took the last slice of pizza, even though you totally had dibs. They re-started your Pokèmon game. They had a nice evening with you, and never called.

The Wild haven't played enough meaningful, contentious games against them for a rivalry to really take off.

Let us hear you, Wild fans. Which team do you hate the most?