One of the best aspects of hockey fandom are the video games. From the release of Nintendo's Ice Hockey in 1988, there have been a wealth of hockey games that have made an impression on casual and die-hard hockey fans alike. During Hockey Wilderness' Video Game Week, we'll be re-visiting our favorites. We continue with NHL 07.

EA's NHL series is one of the few left standing in the world, as Tony mentioned yesterday. There have been a few games in the hockey world that were game-changers, and while NHL 07 isn't one of those, there are 2 important facts that make it my choice for HW Video Games Week. Firstly, this was the first installment to use the "Skill Stick," making it easier to deke, shoot, and puck handle; all without having to use any buttons. Secondly, this was the first game in which I used "Dynasty Mode" leading my Minnesota Wild squad to 5 consecutive Stanley Cups.

NHL 07 was released, like pretty much every EA sports game, in September (2006), and was hailed for its revolutionary new control scheme. This was one of the bigger redesigns in hockey video game history, and was quite polarizing amongst the fan base. Some players loved the new controls, and the fluidity they allowed, some... didn't. 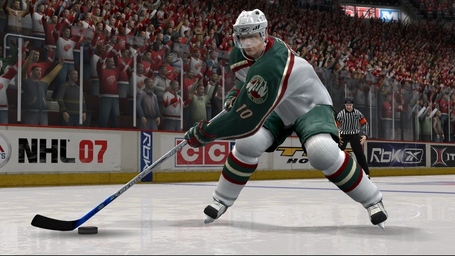 I was introduced to video game hockey in my freshman year of college (prior to this, I focused on first-person shooters and platforming adventure games). My roommate that year was a football (insert slightly kinder word for wannabe), and spent more time sleeping off his hangovers than he did going to class. Fortunately for me, he did this mainly at his cousin's house, leaving our small dorm room for me. I was pretty much the only Minnesota Wild fan in the music program, and as such, spent a lot of my NHL 07 time in Dynasty Mode. And my team of choice was- you guessed it- my Minnesota Wild.

The roster in NHL 07 left something to be desired (to say the least). There were, however, some stellar names. Derek Boogaard headlined the "tough guy" role, and this was one of the last games to have Marian Gaborik in the green. Mikko  Koivu was there of course, but so was my favorite player, Brian Rolston. Josh Harding and Niklas Backstrom were in net, but this was well before Harding was the stellar player we know him as now. If you're interested in reliving the full roster, it's still available on Hockey-Reference. 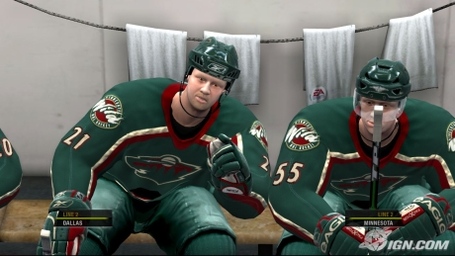 Possibly as a result of spending all their time on the new Skill Stick, EA removed pretty much all game modes and features from the 07 release, save my old friend "Dynasty Mode". This was a mode in which you are GM, head coach, and play as the team itself. It also had some very "useful" features, such as upgrading the furniture in your office, and buying plaques for each team in the league.

In all honesty, this wasn't a stellar title. The new control scheme was nice, and the gameplay itself wasn't bad, but EA took a few years to solidify the control schemes and add features back in.

What Dynasty Mode did bring, however, was the chance to bring my Wild the cups they deserved. The first season wasn't anything special- I think I was eliminated in the first or second round of the playoffs. After that, though, I had the hang of the game, and the other GM's were less than great. For the 2nd season, I was able to pick up Alex Ovechkin and Jaromir Jagr... and I did it trading nothing but young players and overpaying. 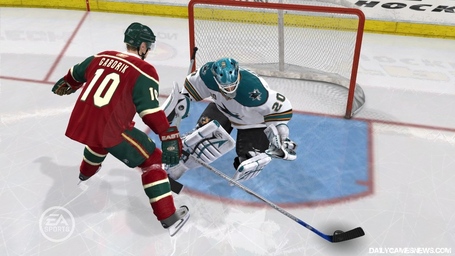 This led to a great run by the Wild. We won the cup for the next 5 years, with 2 of the seasons being completely undefeated (after that, I had to turn the difficulty up). The only reason I had to stop after 5 was due to a tragic moving accident, where my NHL 07 disc was shattered. Heartbreaking, really.

I've yet to find the mastery of any hockey game that matched what I once had with NHL 07 (probably had something to do with how much free time I had in college). The EA installments since have edged towards slower, more "realistic" play, while 07 was still more or less in the fast, arcade-style, hard-hitting checks genre of hockey games.

If you find a copy, win a cup. Win 5, and do it for me. While it had its problems, NHL 07 was and is my favorite hockey video game, both because of my historic run with the Wild, and because that was the first season I ended up having to listen to games on the radio instead of watching on TV; it was my first hockey season living in Wisconsin.

The last little tidbit about NHL 07 that is relevant is that it was the only hockey game released for PSP. PSP owners are so let down by the lack of support/new titles, that they are still releasing roster updates for NHL 07.

Do you have any NHL 07 memories? Things you remember liking or hating? share them below!