As we continue our walk through video games of hockey past, today we take a look at a classic. One that you could argue, got the puck rolling for everything else to come after.

Here it is folks, the game you have all been waiting for. Well, at least those of you who are old enough to know just what up, up, down, down, left, right, left, right, b, a, select, start is for. When it comes to hockey games for the original Nintendo Entertainment System, there are 2 groups of people. Those that swear by Ice Hockey, and those that have seen the light, and play Konami's classic, Blades of Steel. 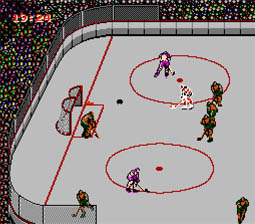 Blades of Steel was released for the NES in 1988 where it quickly found an audience based on its teams, which were fictional to be sure, but were also loosely based off real NHL teams in Canadian and American cities. Part of my fascination with this game came from the fact that I could play as Minnesota, who played wearing Vikings colors, against teams like Chicago, New York, Los Angeles, Vancouver, Toronto, Montreal and Edmonton.

The game was known for many things. For one, it was one of the first games that allowed you to control the goalie. The goalie of course would move with your active player, so really you got to control 2 players at once. This could lead to much frustration when you focused too much on a player or goalie in the defensive zone. Shot direction was determined by a little arrow that would scroll up and down across the goal line, so the savvy netminder was likely to stop just about any shot coming his way. 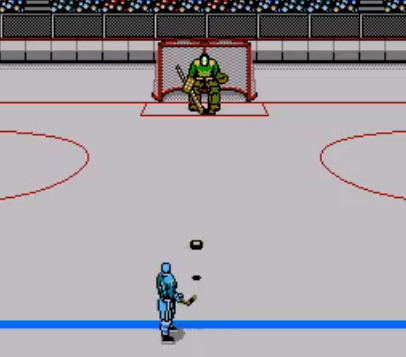 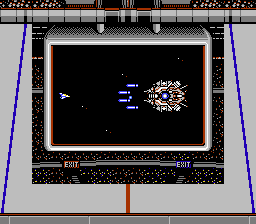 Another often unheralded feature of Blades of Steel was the intermissions. Konami used the intermissions to attempt to pedal their other games, like Contra. They also included a little mini-game you would get to play where you controlled a space ship and would fight off enemy ships on the jumbotron while your virtual players took a little breather from bumping into each other and a Zamboni cleaned up the virtual ice. 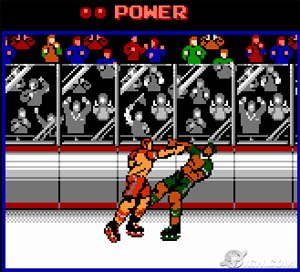 But I think the feature that made Blades of Steel stand above the rest was of course, the face punching. Just like your standard hockey game, if you happen to bump into the opposing player 3 consecutive times, it was time to drop the gloves. Although fighting has come a long way as hockey has evolved on video game consoles, there is one aspect of a fight in Blades of Steel that was completely unique. The loser goes to the penalty box, and it was the only way you could earn a man advantage in the game as well. 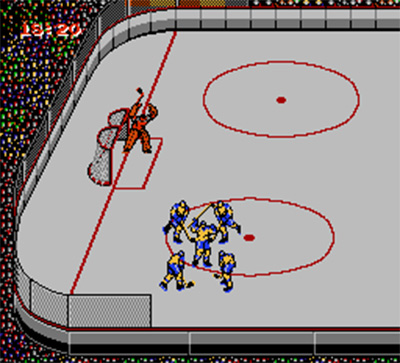 Blades of Steel set the bar when it comes to hockey video games for the NES, and it's a bar that, in this writers opinion, was never topped. From the incorporation of fighting, to teams based out of actual NHL cities, and even the cheesy digitized voices (with the pass!), Blades of Steel is still a game that transcends the ages. If you're old enough to have been there, in that time when it was released, you know all about this game already. If you pay attention to peoples avatar pictures here, you would already know that Joe uses the classic goal celebration from Blades of Steel as his picture. If you're one of those younger folks out there, you missed out. I would recommend you find a working NES system or perhaps a link online to download a NES emulator and download the Blades of Steel ROM. It was, far and away, the finest hockey to grace the 8-bit graphics of the Nintendo Entertainment System.