On March 4, 2014, undrafted free agent Zack Mitchell quietly signed with the Minnesota Wild the day before the trade deadline, as most of us were distracted by the new additions of Matt Moulson and Ilya Bryzgalov.  The casual fan had probably never heard of Mitchell at the time, but for scouts and close followers of the OHL, this was a secretly good signing.  OHL scout Sean Lafortune knew it was only a matter of time until someone would see Mitchell's true value. 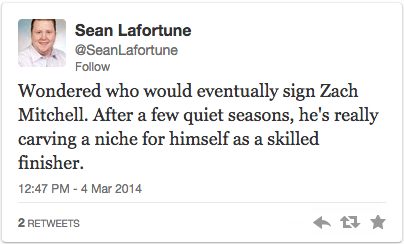 For those who may not be as familiar, here's a quick rundown:

For the past five years, Mitchell has played for the Guelph Storm of the OHL.  He had a breakout year in 2011-2012, leading the storm in goals (37) and assists (38), playing in 67 games.  Since then he has been a very consistent player, serving as an alternative captain for the Storm and leading them to an OHL title in 2014 and a Memorial Cup appearance.  He tore it up in last year's playoffs, scoring 30 points in 20 games.  Here's a quick highlight clip of a 2-point night for Mitchell in the Cup against Edmonton:

Zack Mitchell is the type of player that fits in well with the Wild's style of play.  He is a tremendously hard worker and plays a complete offensive and defensive game.  Last year, he finished with a sensational +52 rating.  He's not the biggest or fastest on the ice, but he is a smart player who has the ability to finish. Scouting reports tell of Mitchell's high end stickhandling and above average skating ability.  A lot of his goals come from just getting to the scoring areas and making the most of opportunities.  In fact, his style of play is very comparable to that of Zach Parise, especially on the power play.  Furthermore he can play in any situation and is a reliable penalty killer.

Zack is extremely motivated to make the NHL someday.  At the age of 16, he turned down a full ride scholarship to Harvard in order to play junior hockey and pursue his professional dream.  He waited through two drafts as teams passed over him.  He's been through NHL development and training camps only to walk away without a contract.  Instead of giving up on the dream, Mitchell focussed on improving his game.  Patience and hard work are about to finally pay off as he is about to start his first year as a professional hockey player.  He may not have elite talent, but he might make up for it with his extraordinary work ethic.

Perhaps the biggest knock against Mitchell is that he is unproven beyond the junior leagues.  Yes, he put up great numbers for the Storm last year, but he was also overage and played against inferior talent.  Some scouts are skeptical that he has the skill level to make it in the NHL.

At 21, time is running out for Mitchell to prove himself at a high level, especially when the Wild already have solid depth at right wing.  He will have to compete with fellow youngsters Charlie Coyle, Nino Niederreiter, Brett Bulmer, Kurtis Gabriel, and Alex Tuch for a roster spot.

Mitchell will definitely start the year with the Iowa Wild.  He should provide quality depth for Iowa as they try to rebound from a tough inaugural season.  The Wild scouts will keep a close eye on Zack to see how he develops to the AHL.  It's very unlikely he will get a call up to the big club this year, but a solid season in Iowa could propel him up the depth chart for years to come.  Best case scenario for Mitchell would be to have a few solid seasons building experience in the minors before working his way up to a bottom-6 role in the NHL.

The great thing about Mitchell is that his ceiling is very up in the air.  He's the perfect embodiment of a low-risk, high-reward signing.  If he ends up being a complete bust, it won't hurt the team because he was signed dirt cheap.  However if he can somehow work his way into the NHL and excel, the payoff could be huge.

Keep an eye on Mitchell this year down in Iowa.  He could very well surprise us all.