The countdown continues with one of the Wild's newest additions.

Share All sharing options for: Top 25 Under 25: #16 Jordan Schroeder

Coming in at no. 16 in our Top 25 Under 25 rankings is Jordan Schroeder of Prior Lake, MN, who turns 24 at the end of the month and thus will not be eligible for next year's list (the cut off is October 1st). The 5 ft 8 centre was originally drafted 22nd overall by the Vancouver Canucks in 2009, but became a free agent this Summer when they decided not to give him a qualifying offer.

At 5'9/180, Schroeder isnt' the biggest player in stature, but he may be the most complete. Schroeder is a highly intelligent player that thinks and understands the game exceedingly well. He possesses excellent vision, awareness, and knows where plays will end up. He is instinctive and creative. Schroeder has the ability to make players around him better and his infectious enthusiasm and passion for the game is difficult to miss.

Schroeder has proven time and again that he is more than capable of competing against bigger and stronger players. He is remarkably strong on his skates and while he is still growing into his body, the strength that he now has he uses to great advantage. This can be seen in areas such as protecting the puck and his play along the boards. Schroeder has also demonstrated that he can handle the physically punishing aspects of the game as well.

Scouting reports on him consistently note that:

A lot of this sounds similar to Jared Spurgeon, another small player who has used his intelligence and puck skills on the ice to overcome his lack of height and who is much more gritty and tough than one would expect when looking at him. While Schroeder seems to have these good tools, he hasn't been able to produce at NHL level yet and, in a league obsessed with size, it's tough to keep your job when you're 5"9 and not scoring.
But what about his  two-way play? To get a bit more perspective on his overall game, I'm going to present some dCorsi data from his two NHL seasons so far. 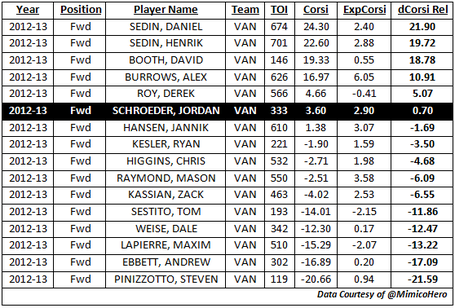 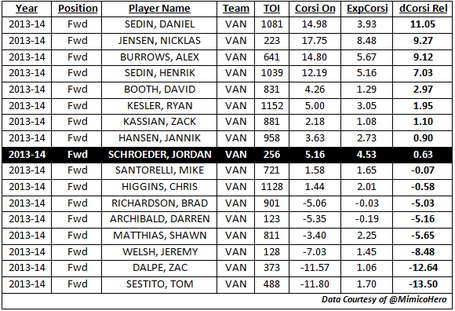 The data from both seasons put Schroeder just on the right side of "0", showing that he marginally exceeded his expected possession numbers twice. I think it's fair to say that he's not a liability when he isn't scoring and may have some value as a defensive player. Obviously both of those seasons are fairly small samples due to his lack of games, but the numbers are reasonably encouraging.

In spite of him being a decent play driver, the return in terms of on ice goals differential has been underwhelming. Last year was a disaster, with the Canucks only scoring a 42% share of the goals with Schroeder on the ice at 5v5. This can be partly explained by his extremely low PDO as he was one of the lowest ranked forwards in the league in terms of On Ice Sh% and On Ice Sv%. Surely he's due for a bounce back year in 2014/15?

PDO is partly driven by skill, but mostly driven by luck/randomness. History tells us that extreme highs or lows one season are likely to regress to the mean the next. If a low On-Ice Sv% meant a player was bad at defence, then Jonathan Toews, who ranked just a few spots higher than Schroeder last year, should probably hand back his Selke. Truth be told, Schroeder just played in front of some below par goaltending in what was a disastrous season for the Canucks.

I think the most likely scenario next season sees Schroeder start the year in Iowa as their 1st or 2nd line centre, but there's a case to be made that he could be a useful piece on the NHL roster. He is a natural centre,but his F0% has been fairly disastrous so far in his career so I'm not sure if he's the man you want taking draws. Reading around online, there seems to be some suggestions that he can also play RW, so maybe that could be his route into the lineup. Here are two possible configurations that feature him:

He would be a good addition to a 3rd line that features Haula and either Coyle or Niederreiter. With his decent two-way play and awareness in the offensive zone, Haula's speed and Nino's nose for the net they could be a dominant and extremely fast depth line. To get that roster spot, he would need to beat out Jason Zucker and Michael Keranen (as well as any youngsters who make an impression on the coaches in camp). Personally, I would rather have Schroeder in Minnesota, allowing Zucker to work on his game in the AHL while waiting for a call up, and also allowing Phillips and Graovac to be the top two centres for the Iowa Wild thus aiding their development.

Another way to use Schroeder would be to make him the RW on a 4th line/defensive line with Cooke and Brodziak. His speed and energy would be suited to that role and would allow Justin Fontaine to play a more offensive role on the 3rd line, which he is better suited for.

In Schroeder's case, he was injured at the tail end of the 2013 season with a shoulder injury and wasn't healthy to open training camp. He was injured shortly after recovering from that injury when he blocked a shot and broke his foot. At no point in this past season was he close to 100 percent. -Thomas Drance, CanucksArmy.com
If Schroeder doesn't make the NHL roster out of camp, I still don't think that's the end of his chances of making it as an NHLer. There will be opportunities again next year when Kyle Brodziak is (likely) gone, and Matt Cooke isn't getting any younger. Still, making the team this year and getting some significant NHL time under his belt could be the difference between Schroeder relaising some of his potential and becoming a useful NHL contributor, or being resigned to a career as an AHL journeyman.
At 24, Schroeder is at the beginning of the typical prime for an NHL player and therefore should be close to the end of his development. I think he peaks as a useful 3rd liner who can step up into a bigger role when there are injuries. Based on what he's done up to this point, I predict he'll score at a low rate but will compensate with a strong overall game.
Hopefully we get to see him a few times this season.

Don't forget to read the rest of our Minnesota Wild Top 25 Under 25 series and look out for new articles every day.