'C' is for Cookie, that's good enough for me. Let's be honest, there's not a lot of fans of Matt Cooke around the NHL. Let's put his beleaguered past aside for a moment, and take a look some of the brighter side of one Matt Cooke.

Matt Cooke has been a polarizing figure in the NHL for the better part of his career. Wild fans will recall his days playing for the Vancouver Canucks. He was always quite the nuisance on the ice, he always played on the edge of what many would consider acceptable play. As the NHL tightened it's rules, Cooke's playing style would clearly take him over that edge on numerous occasions. The result, multiple trips the principals office and several suspensions.

When he signed as a free agent with the Wild in the summer of 2013, it was met with a lot of groans and WTF's from the Wild faithful. What could Wild General Manager Chuck Fletcher be thinking? Bringing a goon like that into our hollowed halls? That's treason!

Last season, Cooke played in all 82 regular season games, he also hit his 1,000th regular season game, as well as notched his 100th career playoff game. Despite everything going against him, Cooke has stuck in this league like the stink in your garbage can. But why? If he's such a detriment to this league, how could he possibly get new contracts worth millions on a regular basis?

It's all in the numbers

Matt Cooke isn't the type of player you put out on the ice who makes everyone else better. Well, unless your name is Kyle Brodziak that is. That's not to say Cooke doesn't bring something to the ice. There are not a lot of forwards on the Wild squad last season that had more 5 on 5 ice time than Matt Cooke. Logging in over 1029 even-strength minutes puts him 4th on the Wild in those regards. Factor in his 199 penalty killing minutes (2nd on the team) and you start to unravel the Cookie Monsters roll with the Wild. The sheer fact that he can be 2nd on the team in penalty killing minutes while being 5th on the team in penalty minutes, with 54 PIM, shows that despite his mistakes, Coach Yeo does not view him as a liability on the ice.

So Cooke doesn't enhance anybodies stats, he's also not dragging anyone down either. Lets poke through one of my new favorite stat lines around, the WOWY!

Matt Cooke, as we learned from a previous article, was stuck on the wing with Kyle Brodziak centering for a good portion of his playing time. We know already that Cooke and Brodziak, despite some less than stellar 5v5 Corsi numbers, can shut down the opposition's offense on a regular basis. These guys don't score a whole bunch, but they allow even less, and on a team starved for goals this is crucial. Matt Cooke plays a pivotal role in keeping the Wild in any game.

The 'WOW' factor in these WOWY (With Or Without You) numbers come off Cooke's opposite wing counterpart. When Nino Niederreiter or Justin Fontaine are playing opposite to Cooke, the Wild shut down opponents at a blistering rate. If the Wild are going to play with lines going into the season, allow me to make the case to keep Cooke lined up with Fontaine and Brodziak on the 4 line.

Making a case for trading Brodziak

The numbers are certainly incredible when you look at them. If anyone is the odd man out on this setup it has to be Brodziak. Don't get me wrong. Brodziak is great in his role, shutting down the opposition is not an easy job and he performs well for the most part. But when looking at these numbers, one has to wonder how interchangeable he could be and what one could gain from trading him away. If Charlie Coyle could prove his worth in the faceoff circle, could you center him on a line with Cooke and Fontaine? This would also free up a top 6 role for Nino Niederreiter, and I think we could all live with that scenario.

It might be a bit much for the Wild brass to bite off, sticking Coyle on what would be a 4th line as a center. Especially with such a small sample size to work with. But come the trade deadline if the Wild are struggling to produce offense and need to make a big push for the playoffs, expect Brodziak's name to land firmly entrenched in trade rumors. You wont be able to get much for Brodziak, as he's a UFA at seasons end and he's an under-valued center in most circles. But a big shake-up in the Wild's line up might be needed late in the season, and something like this could be the shot in the arm the Wild need to make their 3rd straight playoff appearance.

It's not like playing center would be uncharted territory for the young Charlie Coyle. Just last night in the Wild's pre-season game against the Winnipeg Jets he was playing center. This may have been more out of necessity than anything else as the Wild were likely trying to get a look at kids like Tyler Graovac or Gustav Olofsson. He would bring a big body to center a shut-down line, and with bigger names like Anze Kopitar floating around the Western Conference, having somebody with Coyle's frame matching up against him might not be a bad idea.

The fact of the matter is this. Cooke seems to excel no matter who is centering his line. While he played with Torrey Mitchell, Cooke was able to post some pretty impressive numbers with decent minutes, and the small sample size provided with Coyle could lead one to believe moving Brodziak and getting Coyle off the top 6 to slot Nino in there may actually be a move that makes sense. Sure Cooke's numbers with Coyle could regress a little given more playing time, but the more I think about it, the more I'm liking a Cooke - Coyle - Fontaine line out there. 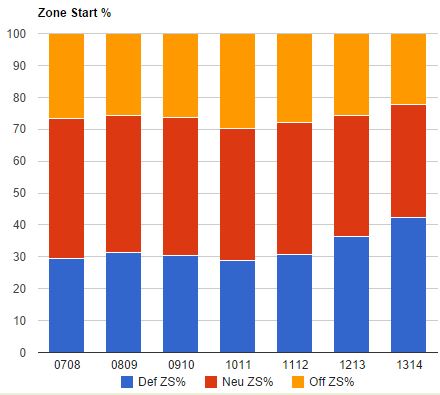 Matt Cooke over the years has pretty consistently had some pretty even zone starts. Generally a sub-30% defensive player, there is no doubt when he was brought to the Wild they had a game plan in mind of how to use him. Even in his final year with the Pittsburgh Penguins you could see the writing on the wall. Cooke has adjusted to the defensive role and excelled at it.

Now, as stated above, Cooke spent a lot of time killing penalties for the Wild. Some of these numbers definitely skew his defensive zone start percentage, but with over 1000 minutes at even strength and sub 200 penalty killing minutes last season, a bulk of his work came with his back to the wall and a need to advance the puck up the ice. It also doesn't hurt he was able to notch a goal and an assist while on the PK last season.

It really cannot be stated enough. With the Wild struggling to put points on the board, the defensive role on this team remains as important as ever. The Wild hope that the addition of Thomas Vanek and perhaps the emergence of someone like Jason Zucker can boost their offensive output in games. But unless the Wild are consistently putting up 5 goals a night, the defensive portion of their game will remain as important, if not more important, than the offensive portion. Cooke has shown us that through his play, he can shut down the opposition while giving some valuable offensive zone starts to the point pushers.

I know, talking about Matt Cooke with a positive spin is not a popular choice with NHL fans. It's really tough however to argue that he hasn't turned his game away from the dirtier side of things. All last season you could see it. He'd have players lined up, dead-to-rights, and where you expect him to raise an elbow or extend a knee in the past, he just didn't. Yes, he did get a knee on Tyson Barrie in the playoffs. And no, that's not something anybody wanted to see. But honestly, the Avalanche were so busy with sucker punching Mikko Koivu in the back of the head, I'm sure he figured nobody would even notice.

Like it or not sports fans, Matt Cooke is here, and he's not going anywhere. When he's playing his reformed game, he's making it pretty tough on the opposition to get anything started, and that's his job. He's going to rattle a few cages, and he's never going to get the benefit of the doubt. That shouldn't bother us. He's played a full season with the Wild now, we know what he brings to the table, we know the stigma that comes with the guy. But the numbers don't lie. Matt Cooke can play, and that's the part of the game that we should expect to see more of this season.

Big thanks to Hockey Analysis for providing the stats and graph.