Share All sharing options for: NHL 15: A Curmudgeon's Review

NHL 15 was heralded as the next step in hockey gaming. It is the first NHL game to come out for the "New Generation" (Xbox One and PS4). As a tip of the hat to those troglodytes who had not yet upgraded to the newest hardware, EA also released the game on the older consoles (Xbox 360 and PS3).

That was their mistake.

The problem EA now faces is that they have released 2 very different games,and while one looks better, runs smoother, and generally is prettier, the other is heftier, with more content and a better user experience.

Fortunately for myself, I am a troglodyte-curmudgeon, and am still using my old reliable Xbox 360.

While I won't recreate The List, I will highlight some differences here.

For the Xbox One and PS4, users do not have
-Live the Life Mode (Career mode starting in the CHL and earning your way into the NHL)
-GM Connected
-Online Team Play
-Tournaments for Hockey Ultimate Team
-You cannot play your friends in Hockey Ultimate Team
-There is no smartphone App for Hockey Ultimate Team
-Be a Legend Mode
-Winter Classics
-Create-a-Team
-Customizeable AI for each team
-Top 3 Stars at the end of each game
-Custom camera options
-The ability to edit characters
-Practice mode (beyond player vs. AI goalie)

Within GM Mode, Xbox One and PS4 users will not have:
-Control over your team's draft
-Control over the AHL Franchise
-Players sent to the minors do not accumulate stats

Within Be a Pro Mode, Xbox One and PS4 users will not have:
-Skip to Next Shift option (you have to wait through the simulated game)
-You cannot play in the minor leagues, only for the NHL.

You might notice that I specify Xbox One and PS4 users throughout... that is because many (though not all) of those features are available for the Xbox 360 and PS3. With this, EA Sports has really screwed the pooch.

It's a simple question, with a simple answer. Coding for newer hard- and soft- ware is difficult and time consuming. EA has announced that they will be releasing some of the above features via patch at a later date. From EA's point of view, they don't want to release the game with features that aren't up to a certain standard.

Frankly, I can dig that. However, I don't buy it. Both the PS4 and the Xbox One have been out for a while now- nearly a year. That is plenty of time to program adequately. Which leaves one of two reasons:
Option 1) EA mis-managed time, or had bad programmers, got behind, and this is what they have to do.
Option 2) EA believed they could omit these features, and only after fans have put up a fuss did they decide they should include them.

Enough! On With the Review!

I'll admit: I'm playing this on my old Xbox 360, so I get all the bells and whistles. I'll also admit that the most recent NHL game I've played is NHL 12. 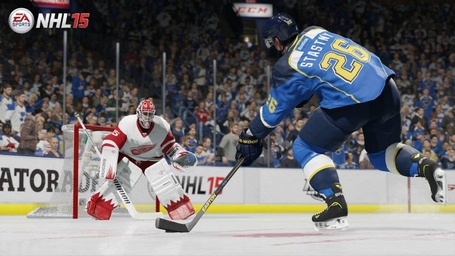 First of all, the game looks fantastic. Players' faces look more realistic, the crowd look like human people, the ice reflects more realistically. The jerseys no longer look painted on (or at least are painted with high-quality acrylics). What's more skating looks, and handles more realistically. You have actual momentum, and it changes; you can corner faster when going slow as opposed to fast, etc.

Furthermore, the contact detection is high-quality; you can knock down your own players if you aren't careful, bumping into players causes actual interaction, rather than the bumper-cars motions of yesteryear.

Shots have decent power, and generally go where you aim them (within a 'range' based on a players' shooting rating). What is even better: the AI will tap in pucks, and deflect rebounds. I watched Mikko Koivu automatically reach out and tap a Marco Scandella slap shot down and behind Varlamov, which was great. 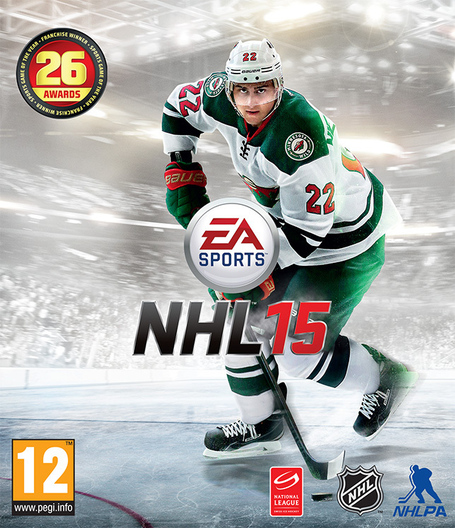 Goalies have a tendency to let in really soft goals. Really. Also, the AI tends to be more than realistically proficient at getting to loose pucks near the net, and goalies are helpless to stop them (unless it's the AI's goalie).

There are a few times where you go to hit the AI, and you bounce off the player, giving them a breakaway opportunity. Similarly, both players may fall over, but the AI gets to their feet significantly faster than your player.

These are small gripes, to be sure, but annoying in that they stick out since so much of the game is so well put together.

The problems with the AI for the opponent and the AI for your team are fixable- you have to play with the settings- but it can be done. The trick is finding a balance that is neither impossible nor too easy.

Calling a Spade a Spade

On a similar note, the teams are ranked far too similarly to each other. While I'm sure this was an attempt to create parity in the "Play Now" mode (since it is pretty much all that's left to PS4 and Xbox One users), but this does shortchanges the ability to be a GM and build a decent team from a disaster. The Oilers, Wild, Tampa Bay Lightning, Bruins, Canadiens, Avalanche, Blackhawks, and Kings all have the same rating (in terms of stars).

Again, small gripes, but they stick out more because so much of the game is so well designed.

What I discovered upon turning on my machine was a VERY confusing roster. It was fixed through an update within a day, but this is fun to type, so I'll put it here.

Backstrom is rated higher than Harding... why and how I'll never know. Maybe Harding's career numbers aren't better than Backstrom's, but anyone who honestly believes Backy is the better goalie is fooling themselves.

Here's another complaint: editing lines is far more complex than it really ought to be. The way it works is you have to click the player you want to replace, scroll through a list of everyone on the team, and click the person you want there. If that person is already on the roster, SOMETIMES they will flip-flop, sometimes not. So, if you're not careful, you can end up with the same person in 2 different lines. There was one glitch where it told me I had too many skaters dressed (though I did not), but it was fixed quickly, with a little ‘save-load' action.

The controls are very similar (from what I understand) to NHL 14; at least, they are the same as NHL 12, so they can't have changed much. For the most part, they operate extremely well. The passing is smooth, shots occur when you want them to, and the playoff controls are much more user-friendly than before (though that is more an AI issue than the controls themselves).

My least-favorite glitch from NHL 12 still remains: when your goalie has the puck, and you click to pass it to a player, he is not a great passer: he sometimes passes it into his own net (seriously), I've seen him pass it the complete opposite direction of what I was pressing- onto an opponent's stick (and into the goal of course). Maybe more frustrating is that the controls occasionally lag- especially passing. There are times that you will press pass, the player won't do it, so you try to do something else... and then they pass. It's VERY minor, but obnoxious regardless. 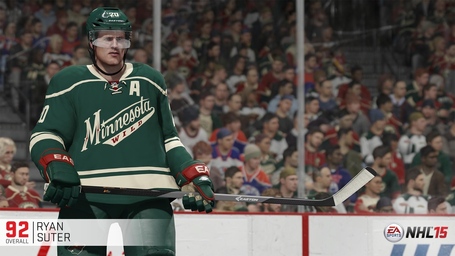 So the big question: should YOU buy NHL 15? Well, that depends. It has updated rosters, which might be very important to you. If you devote the time, you can do that yourself using the creation center.

For me, the updates since NHL 12 were pretty dramatic; it made sense for me to update. If you are using a game earlier than NHL 14, it probably makes sense to update.

The biggest question is what platform you're using. If you are thinking of buying NHL 15 for the Xbox One or for the PS4, it's much harder to justify, simply because we don't know what all features will be added back in by patch, or what they will be; if that's your system, I would wait. Other than looking great (and working on your new toy), NHL 15 and NHL 14 are virtually the same game.

If your system of choice is the Xbox 360 or PS3, then you simply paying for a roster update (if you already own NHL 14). It's far easier to justify purchasing 15 for either of these two, simply because all of the features are still included.

So what do you think, Wilderness? Do you have any experiences with NHL 15 you'd like to share? Hit the comments!