The 2011 first round selection lands at number 4 on our list.

Jonas Brodin is only 21 years old. What were you doing at 21? Pounding shots and beers during power hour in college? Yeah...this kid has been in the NHL showing all kinds of promise of being a real top-notch defensive prospect. Jonas Brodin has four more years of eligibility on this list. Brodin came in as a 20 year old rookie in the lock-out shortened season and impressed the coaching staff with his poise with the puck and his ability to elude contact. He earned his spot alongside Ryan Suter that year and was one of the best defensemen on the team. In the 2012-13 season, Brodin saw more zone starts in the defensive zone and was a positive Corsi Rel player at 2.98 percent. He wasn't able to find the back of the net, but did tally seven helpers. 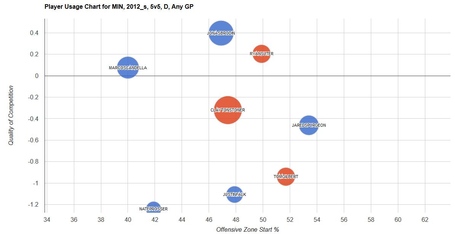 Brodin was scouted as an incredible skater.

If you fast forward to the 9:47 mark, You will see Brodin get his name called in the 2011 draft. Then, at the 12:30 mark, Brent Flahr and Mike Yeo discuss the selection of Brodin. It's almost spot on with the type of player we have seen since.

The 2013-14 season was supposed to see Brodin take another step; hopefully providing more offense from the blueline. His season started out that way as he was able to score 2 goals and 3 assists in the firs t 6 games of the season. He was playing well, although not nearly as solid as his rookie season. Then in a late October game, a dump-in attempt came up too high on Brodin and was lost for 3 games with a fractured cheekbone. The play, while a freak occurrence and an accident, caused Brodin to play a little more skiddish for most of the year. It caused him to lose his spot next to Ryan Suter, as he lost that spot to Jared Spurgeon. 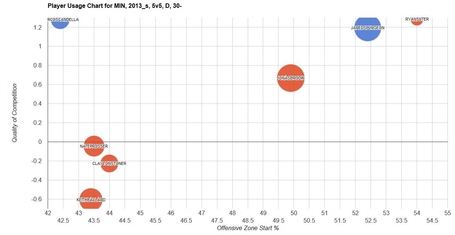 The good thing is is that he seemed to come out of his funk in the playoffs.

Brodin isn't the kind of prospect that is going to shoot the lights out for the Wild. In fact, any offense he can add should be considered a real bonus. What he is going to provide is solid defense, good puck skills, and great mobility.

Brodin while taking a step back last season isn't something we like to see from him, being that he is only 21 years old starting his third, not even NHL, Pro season in North America should give all Wild fans hope for good things from Jonas.