A Tale of Two Forwards: Niño and Coyle

Despite the protest of #TeamNino, Mike Yeo continually gave Nino worse minutes than Coyle. Was he justified in doing so?

Share All sharing options for: A Tale of Two Forwards: Niño and Coyle

There's been a lot made of Nino deserving better minutes than he gets, and Coyle not deserving the minutes he is getting. Is this uproar justified? Let's start with the players.

Charlie Coyle is the 6'2'', 207-pound Center/Winger from Massachusetts, whom Wild fans have come to love ever since he displayed his soft side for a young fan. After coming through the Boston University (where he earned 40 points in 53 games), Coyle moved to the St. Johns Sea Dogs for a season. During his time in the QMJHL, Coyle put up a monstrous 38 points in 23 games.

Coyle then spent 2012-13 split between Texas with the Houston Aeros and Minnesota. With the AHL club, he played 47 games and posted 25 points. During the lockout-shortened season Coyle played 37 games and only earned 14 points. In his second season, Coyle played 70 games, posting an improved 30 points.

You can find full stats for Coyle here.

Nino Niederreiter, on the other hand took quite a different approach to the majors. He played for 4 seasons in Switzerland, for a number of different teams (including their national team) before joining the Portland Winterhawks of the WHL. Ironically, though Nino was prolific in their developmental squads, he never played a game for the team he was under contract with in Switzerland: HC Davos.

After making the jump to North America, Nino spent two seasons in Portland, tallying 60 points in 65 games in his first. After being drafted by the New York Islanders, Nino set fire to "The W," scoring an unbelievable 70 points (41-29) in just 55 games. It's worth noting that Nino also played 9 games in the NHL with the Isles that season, netting his first goal and tallying his first assist.

The next season (2011-12) found Nino spending 55 games in New York and 6 in their AHL Affiliate in Bridgeport Sound. In these 61 games, Nino put up a paltry 5 points (only one in the NHL). It was at this point New York decided to bury Nino, locking him in the AHL for a season, where he earned 50 points in 74 games; not shabby by any means.

It was then that the Islanders were Snowed by their GM, and lost Nino to Minnesota for Cal Clutterbuck. This season, Nino put in 36 points in 81 games.

Each player has come to the NHL with at least one unsustainably high season, and each followed that season with a goo-but-not-great season, from a point-production standpoint. Coyle's 30 in 70 and Nino's 36 in 81 create an almost-identical Points-per-game of .43 for Coyle and .44 for Nino.

Despite their wildly different developmental paths, they each played 4 seasons before contributing significantly to an NHL team. Developmentally, Coyle has a slight edge in that he exclusively played in North America, while Nino was in Europe, but then Nino also had one more year of play before he was consistently with an NHL team.

Coyle also had the advantage of having some wonderful teammates- particularly on St. Johns. Some of his fellow Sea Dogs were Jonathan Huberdeau, Zack Phillips (who was lighting up the Q at the time, despite his recent struggles), and Tomas Jurco. Nino, on the other hand, lacked truly notable linemates until he entered the AHL.

What is a bigger factor, however, is the way in which Nino was mis-handled by the Islanders. In an effort to get a promising forward, New York wasted 10 games keeping Nino in the NHL in the 2010-11 season; they played Nino for 9 games, during which he accumulated a measley 2 points. This was not entirely Nino's fault; he was not ready for the NHL game. In this season, he played 112:34 for the Islanders in 9 games; just 12.5 minutes per game on average. He did play significant minutes with Doug Weight and Milan Jurčina, who had decent years despite Doug being 40 years old. He also played with names like Michael Grabner, Mike Mottau, and others who aren't exactly brilliant players.

The simple fact is: Nino was not prepared to carry an NHL load, and was a possession anchor of Heatley proportions for those nine games; he posted a CF% of 39 and a CF%Rel of -12. All this was despite starting in the offensive zone 65% of the time.

After a solid showing for the rest of that year in the AHL, Nino was given another shot at the big time. He played 55 games in New York, only earning one solitary point. Despite the (technically) worse production, there are signs Nino was improved (though clearly still not ready). His CF%Rel had risen to -4.5. Further, he had less sheltered minutes, starting in the offensive zone only 46% of the time.

Furthermore, Nino was absolutely snakebitten this year: his sh% was a pathetic .8%, and his PDO was 898, the 2nd-lowest on the team (Trevor Gillies had the bad-PDO advantage in not scoring a single goal). In other words, Nino played harder minutes and had terrible, rotten luck.

It's easy to see why New York was tired of Nino. After his bad year in New York, he posted another solid AHL performance: 50 points in 74 games.

Because of their different developmental paths, and the way in which Nino was completely mishandled, it's hard to draw clear comparisons between the two. You could argue that Nino had the advantage this past season, having played in more NHL games, and in multiple season. This is not a fair statement, however:

Personally I would argue just the opposite: coming into the 2013-14 season, Charlie Coyle was better set up for success than Nino, and here's why:

Coyle had played fewer games in the NHL, it's true, but he played them at a time in his development that makes far more sense: he had played multiple season in North America, whereas Nino had only played one. Coyle had played with this teammates before, in this system, and under this coach, Nino had not.

Most importantly, Coyle got better minutes this past season than Nino. Was This Justified?

It's easy to see Mike Yeo's reasoning; Nino had yet to show success in the NHL, whereas Coyle posted 13 points in 37 games. Coyle had been in the organization significantly longer than Nino.

I would say: yeah, probably.

Coming into this season, Coyle had shown success in the Wild's system, including under Mike Yeo. He had had a successful foray into the league last season. Even with Nino's success in Europe and in lower leagues, he hadn't shown the same success in the NHL (albeit, for understandable reasons that were beyond his control). 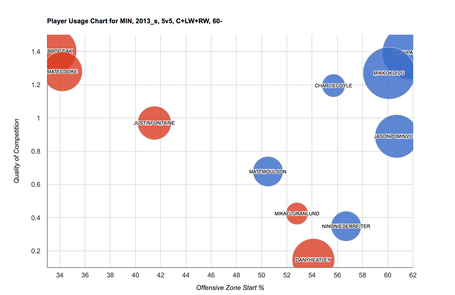 Courtesy of Some Kind of Ninja

There are signs that Mike Yeo knows he has something special in the Knightrider. Throughout the regular season, Nino was playing easier opponents than Coyle. Yet, when we look at the postseason: 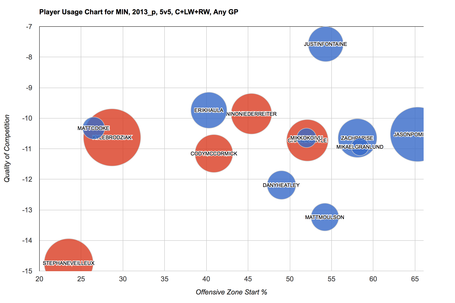 Image Courtesy of Some Kind of Ninja

As you can see from the above usage chart, in the playoffs, Yeo started playing Nino against harder opponents than Coyle.

There are a few caveats here.

Firstly, it's not likely Yeo flipped a switch and started playing Nino against harder opponents; likely Yeo was shifting his opponents throughout the season, and this is representative of the end of the season distribution.

Secondly, the playoffs are a TINY sample size which is further warped by only playing two different opponents.

Thirdly, Coyle was injured part ways into the playoffs; this likely affected his deployment at least somewhat, causing the chart to be warped.

Moving into next season, Minnesota fans can rest assured that they have two capable forwards in Nino and Coyle. Who gets the "better" minutes will likely rely heavily on the training camp and who has the "hot" hand. If Nino plays how he has in lower levels, he will be a frighteningly good player. Coyle has also produced well, but has tended to rely more on line mates for points themselves. Nino tends more to score goals more than earn assists.

Nino showed some great things last season, which confirmed that Yeo and Chuck Fletcher were right to snag him. His point production was good, and his possession numbers solid, despite playing with generally worse teammates than Coyle.

In addition, Coyle tended to drag his linemates down just a tad in terms of possession, whereas Nino often enhanced his linemates' possession numbers.This may, in the end, be part of the reason Nino plays with "worse" teammates; he can make weaker players better, whereas Coyle needs to play with strong players to do his best.

Ultimately, Minnesota fans can be assured they have two promising young players, and we should be excited to see what these two can do next season.